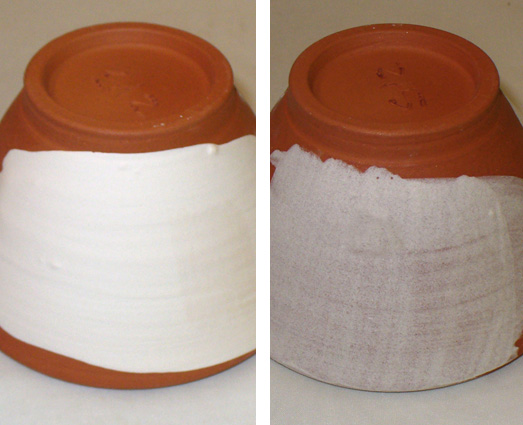 Potters can learn from how glazes are fit on ceramic tile

These are thermal expansion curves for body, engobe and glaze (from a dilatometer, a device that measures it against increasing temperature). The upper line is the body. The center line is the engobe. The lower line is the glaze. The ceramic tile industry is very conscious, not only of glaze-fit but also engobe-fit. Engobes (slips) are employed to cover brown or red burning bodies so they glaze like a porcelain. Typically technicians tune the formulation of the engobe to have an expansion between the body and glaze. The body is highest so that during cooling, as it contracts, it puts a squeeze on the engobe (the engobe thus never finds itself under tension). The glaze has the lowest expansion, it is under a state of compression by the engobe (and slightly more by the body). This equilibrium enables the tile to wear for many years without crazing or shivering. Chart courtesy of Mohamed Abdelmagid.

Applying an engobe by pouring or spraying 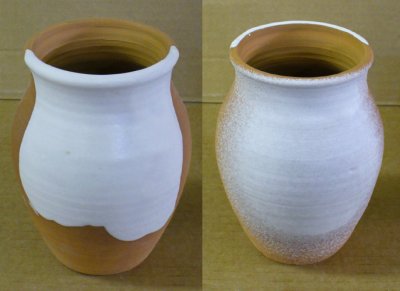 An example of an engobe (slip) applied to dry ware and then fired at cone 2. The one of the left has been poured, the right sprayed. Control of the thickness of engobes is important, thus the specific gravity and viscosity of the slurries are very important. Engobes are invaluable since a red or brown burning body can be made to fire white like porcelain (enabling much better glaze surface quality).