In ceramic slurries (especially casting slips, but also glazes) the degree of fluidity of the suspension is important to its performance.

The term viscosity is used in ceramics most often to refer to the degree of fluidity of a slurry or suspension (the term 'shear' is often used when discussing viscosity, theoretically engineers understand viscosity in terms of layers particles or molecules that exhibit a friction that resists lateral displacement against each other). Viscosity is the opposite of fluidity, a term also commonly used, viscous slurries are thick and thus lack fluidity. Laboratory instruments that measure absolute viscosity (that can be quoted on a data sheet) are called viscometers and they express the result in a unit called the poise. Higher poise numbers mean a more viscous slurry. Units of fluidy are taken as 1/poise, thus 2 poise = 0.5 rhe (water has a fluidity of 100 rhe). However much simpler devices can also be practical for quality control and comparative studies (e.g. a Ford Cup used for paint simply times the drain of a liquid through a small hole in the bottom).

The viscosity of a slurry can be reduced by the addition of a deflocculant, fluid slurries of remarkably low water content can be produced. Deflocculants work their magic by imparting electrical charges to the surfaces of particles to make them repel each other. Conversely, the viscosity of a slurry can be increased by the addition of a flocculant that makes it gel (if its specific gravity is high enough). Soluble materials within a powdered mix can impede or block the action of deflocculants and particle properties like size, size distribution, shape, surface area, surface reactivity, density, etc. all affect their action. See the Potters Dictionary under Fluidity for a detailed and easy-to-understand discussion of this (especially relating to the dynamics imparted by flat particles with differing end and flats charges).

Controlling the viscosity of casting slips is vital to efficient production. However, it is critical that the correct specific gravity first be achieved, then it becomes apparent if more or less deflocculant is needed. Ideally, a slurry needs to be thin enough to pour and drain easily, but it needs to thixotropic enough to form a gel after some time (e.g. 1/2 hour) so that it does not settle out.

Viscosity of glaze slurries is an important factor in their performance. It seems obvious that ones of high viscosity will apply thicker to ware and vice versa. However in practice, the viscosity must be considered in consort with the specific gravity (and thixotropy). Since viscosity can be controlled by adding flocculants and deflocculants, it makes sense to first establish the correct specific gravity of a glaze, then adjust its viscosity. For typical bisque fired pottery a raw or partially fritted glaze works well at a specific gravity of about 1.45 (taking it too much higher could lead to settling, too thick application, tendency to drip, etc). Vinegar or Epsom salts can be added to increase the viscosity to that which works best (gives an even layer of glaze on a fairly quick dip). 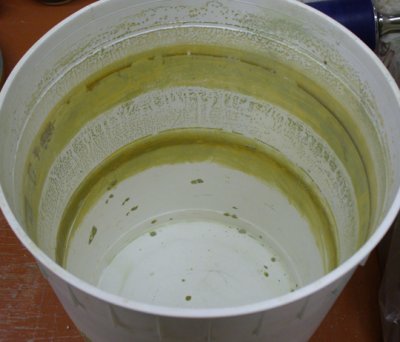 Wrong! That is what the glaze was made of that was in this bucket. The scum on the inside is so hard that it is extremely difficult to remove, even using a scraper or a scrubber. Even lime-a-way does not remove it all. This is an example of how water-soluble materials can be. When this glaze settles out the water on top is brown (like this scum) yet all the material powders are white! So it is not surprising that glaze viscosity changes over time and things dissolve and impact rheology. 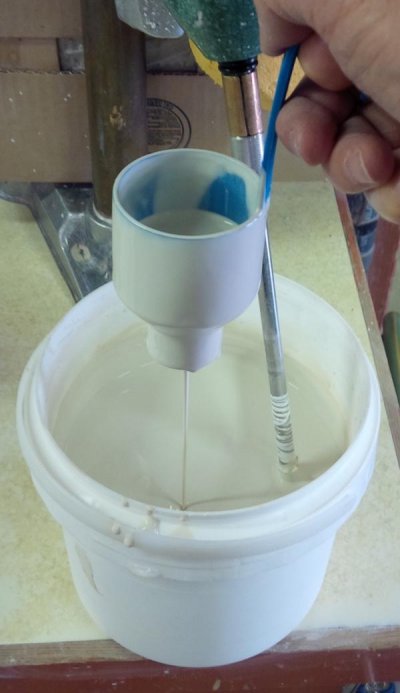 A Ford Cup being using to measure the viscosity of a casting clip. These are available at paint supply stores. This is a #4, it holds 100ml and drains water in 10 seconds (it has a 4.25mm opening). This casting slip has a specific gravity of 1.79 and we target a 40-second drain. That being said, if you are not working in a factory, if will be sufficiently to eye-ball the viscosity as you gain experience. If you are in a high-production situation, the seconds-value that this test produces gives you something to write down in testing records, producing an audit-trail for quality control and problem solving later. One thing to note: A slurry can gel while it is draining, if this happens the value produced is not valid. First adjust the rheology so it maintains viscosity throughout the drain time.