A transparent that looks good on cone 6 red burning bodies

The GA6-A Alberta Slip:Frit 3134 (80%:20%) glaze is excellent as a liner for dark burning bodies, it looks much better than a regular transparent recipe (which often form clouds of bubbles on red bodies). The iron in this glaze makes it fire an amber color on buff burning bodies (not very attractive), but on red bodies it brings out the natural color of the clay. 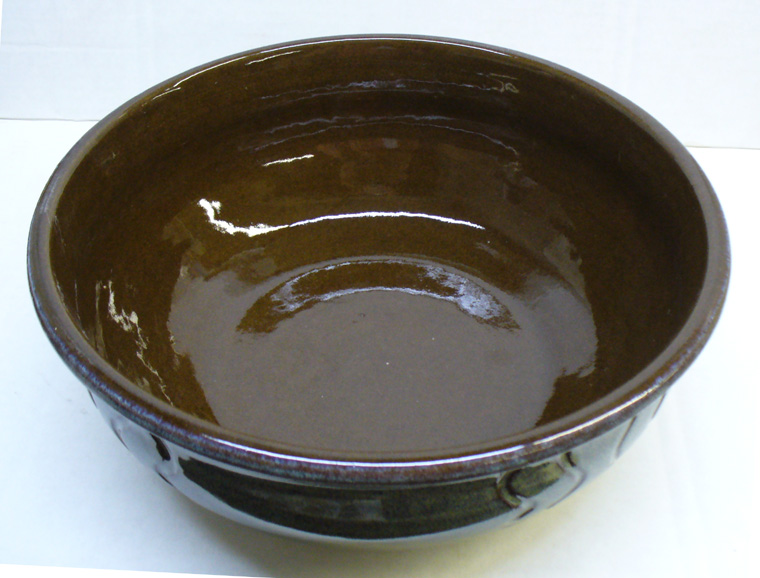 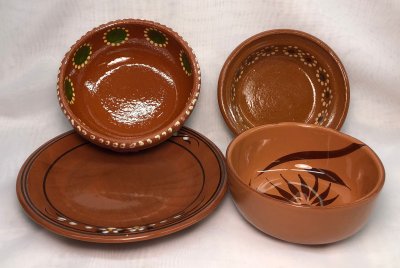 The two back pieces are traditional Mexican terra cotta ware. Lead glazed, porous, not durable at all. The front two pieces are stoneware, produced by two Mexican manufacturers to emulate the look of traditional ware. Both tried. Both failed. It is pretty well impossible to clear-glaze a mid temperature red burning stoneware and get a red color. The glaze fluxes the clay surface and turns the color to the more vitrified version of the body, which is always brown. The terra cotta is fired so far below the temperature at which the clay vitrifies to brown that it maintains the red body color. To get the color in the stoneware plate on the left they brushed on a red-stained engobe (you can see the brush strokes). This worked. And the glaze has fired crystal-clear (likely because they bisque fired it very high). But there is a problem. Although not crazed when purchased, it crazed badly after several months. The bowl on the right also has a beautiful transparent glaze and it has maintained crisp edges on the decoration (and with no micro-bubble clouding). But this is as dark as they could make the clay without having it turn brown under that clear glaze.