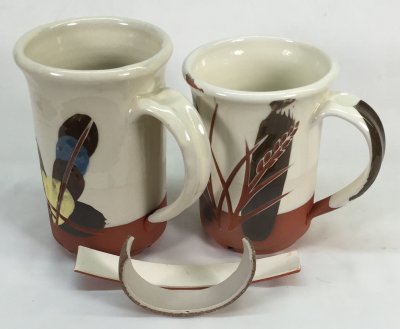 L3685X white slip (left mug) has 5% more frit than Y (right). The frit is a melter, creating more glass bonds to adhere it to the body (it also hardens it and darkens the color a little). But the frit also increases firing shrinkage, 'stretching' the white layer on the body as the kiln cools (the slightly curled bi-clay bar demonstrates that). However the glaze, G2931G, is under some compression (to prevent crazing), it is therefore 'pushing back' on the white slip. This creates a state of equilibrium. The Y slip on the right is outside the equilibrium, it flakes off at the rim because the bond is not good enough. Adding more frit, the other side of the balance, would put the slip under excessive tension, reducing ware strength and increasing failure on exposure to thermal shock (the very curled bi-clay bar in the front, not this clay/slip demonstrates the tension a poorly fitted slip could impose).