How do you decide what temperature to fire this terra cotta at?

Let's suppose you need strength and density for utilitarian ware. These SHAB test bars characterize a terra cotta body, L4170B. While it has a wide firing range its "practical firing window" is much narrower than these fired bars and graph suggest. On paper, cone 5 hits zero porosity. And, in-hand, the bar feels like a porcelain. But ware will warp during firing and transparent glazes will be completely clouded with bubbles (when pieces are glazed inside and out). What about cone 3? Its numbers put it in stoneware territory, water tight. But decomposition gases still bubble glazes! Cone 2? Much better, it has below 4% porosity (any fitted glaze will make it water-tight), below 6% fired shrinkage, still very strong. But there are still issues: Accidental overfiring drastically darkens the color. Low fire commercial glazes may not work at cone 2. How about cone 02? This is a sweet-spot. This body has only 6% porosity (compared to the 11% of cone 04). Most low fire cone 06-04 glazes are still fine at cone 02. And glaze bubble-clouding is minimal. What if you must fire this at cone 04? Pieces will be "sponges" with 11% porosity, shrinking only 2% (for low density, poor strength). There is another advantage of firing as high as possible: Glazes and engobes bond better. As an example of a low fire transparent base that works fine on this up to cone 2: G1916Q. 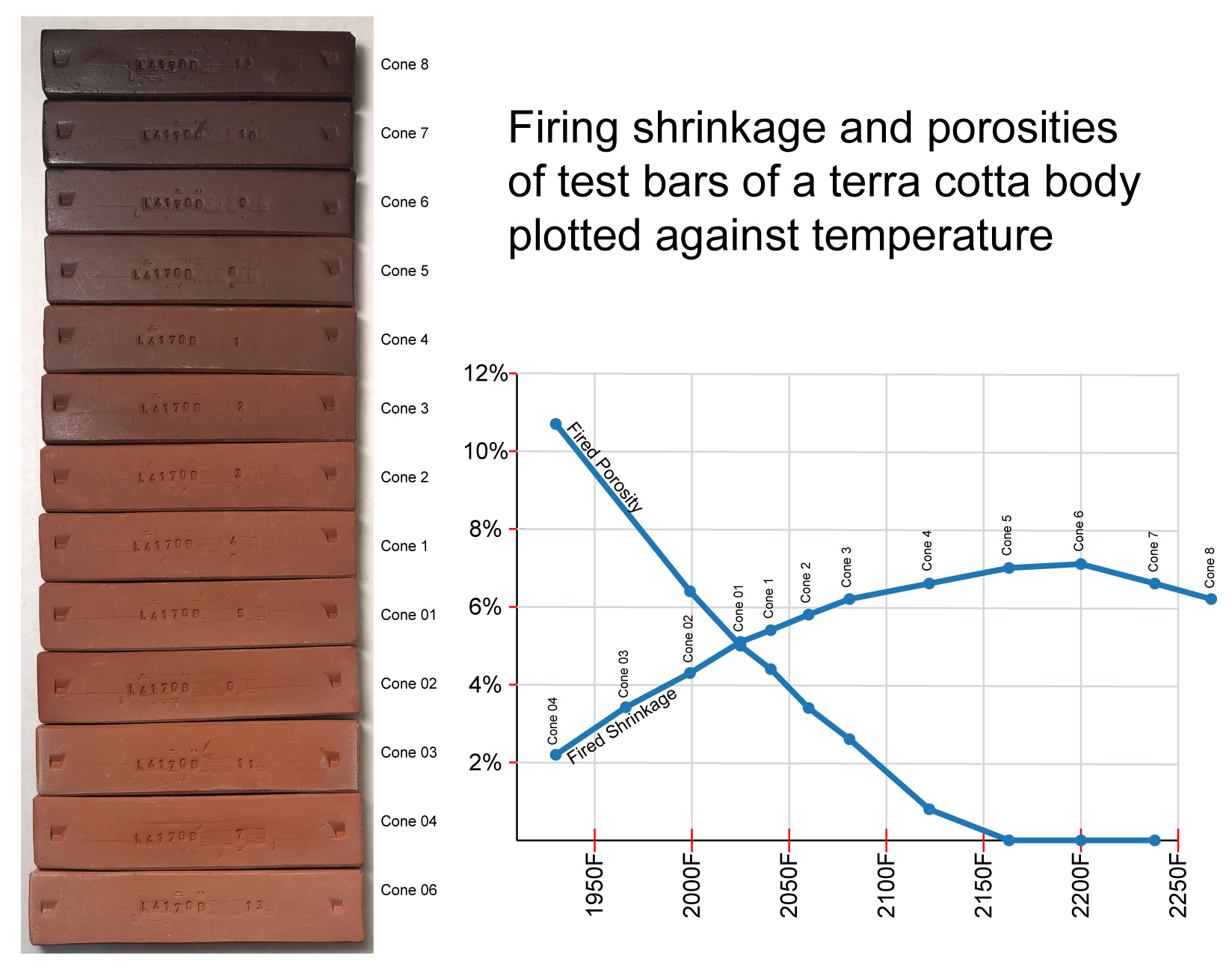 Fitting an engobe: It is about the data! 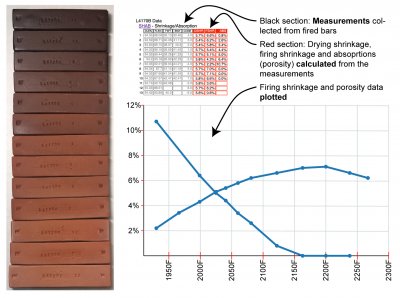 Physical data. Data about the working, drying and firing properties that can measured. These test bars show how stable this unusual terra cotta body, L4170B, is across a wide temperature range (from cone 8 down to 06)! Using the SBAB test procedure, I measured the shrinkage and porosity of each bar (and recorded the data in my Insight-live group account, it displays it like the black and red chart shown). I also made test bars of a super-white engobe, L3685Z3, and compiled the same data. That enabled two approaches to fitting engobe-to-body. First, isolate a temperature at which both have the same fired shrinkage, and are therefore compatible. Unfortunately there isn't one, the white engobe has much lower fired shrinkage at all practical temperatures! Option 2 is to add frit to the white engobe to make it as vitreous as the body. I started with a 5% addition of Ferro Frit 3110. At my target temperature, cone 02, that increased the shrinkage from 2.1% to 5.5% (this red body is 4.3%). So 5% frit is too much. So, the next move is clear, I will try 3% frit. It will only be necessary to test it at the one temperature. Because both engobe and body and not volatile, I am confident in just testing at cone 02.

Foundry Hill Creme: What is it? 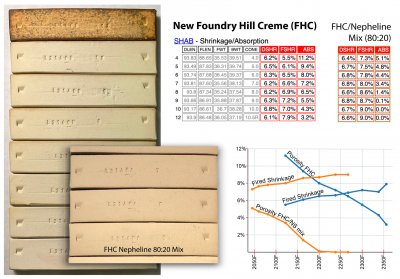 Foundry Hill Creme (FHC) is used in North America as a stoneware body base or addition. It fires like a ball clay, being quite refractory. But it is much less plastic. How much feldspar would it take to make it into a vitreous cone 6 stoneware? We fired SHAB test bars from cone 4 to 10 (bottom to top) and 10R (the soluble salts discolor it in reduction). The data collected (in our Insight-live.com group account) produces firing shrinkage and absorption data that calculates to the red columns (and plots to the blue lines). Notice how the porosity drops steadily from cone 3 to 10 (the firing shrinkage rises steadily over the same period). We mixed it with 20% nepheline syenite and collected the data on that also, that plots to the orange lines. Notice 2200F (cone 6): The added nepheline drops the porosity from 8% to zero (and increases the firing shrinkage about 2%). Notice also the FHC drying shrinkage (the first DSHR red column) averages a little under 6.5%, it is enough to tolerate the non-plastic addition of nepheline syenite and still maintain good plasticity (notice the mix averages a little higher, that is because it was softer).

Should you expect to vitrify terra cotta? 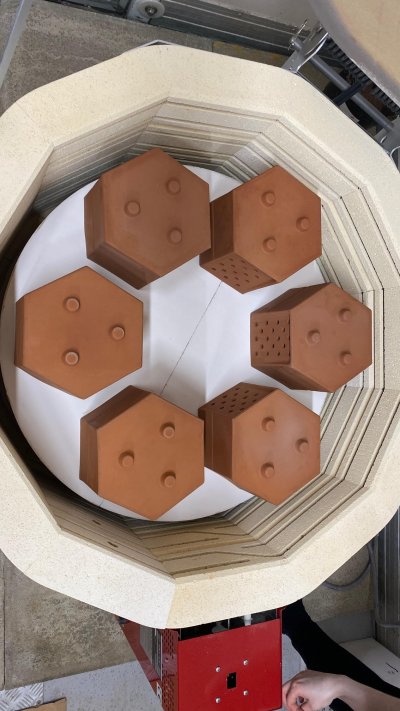 These were cast by Anna Lisovskaya, they are fired at cone 03. They are supposed to fit into hexagonal welded frames, but during firing many of them warp enough to fit poorly. Why? The color differences are the giveaway: The darker ones have shrunk significantly more. Something less obvious: the sides against the elements receive direct radiant heat, so they shrink more, turning a perfect hexagon into an imperfect one. Terra cotta clays are volatile, that means their approach to maximum density during heat-up, accompanied by shrinkage, happens across a narrow temperature range. Accurate and even firing are paramount. In a radiant-heat electric kiln this can be very difficult. Two approaches could work here: Fire at a lower temperature, perhaps cone 04. Or, greatly slow rate-of-rise for the last 100F, perhaps over several hours.