Also called "middle temperature" by potters, cone 5 (~2160F/1180C) refers to the low end of the temperature range at which most hobby and pottery stonewares and porcelains are fired.

Many potters are moving from cone 6 (2200F or 1200C) down to cone 5 (2160F or 1180C). The energy savings by firing 40 degrees F lower is considerable and there is much less wear-and-tear on the elements in electric kilns. As kiln elements get old the kiln really struggles to climb the last few degrees.

Conveniently, many middle temperature commercial glazes are targeted at the cone 5-6 range. Most cone 6 pottery glazes still melt well, especially with temperature holds at the end of firings. Test firing, especially using the C5DHSC schedule, will prove whether cone 6 glazes work. In many cases, especially with reactive glazes that are actually over fired at cone 6, better results will be obtained at cone 5.

However, making bodies mature a cone lower can be tricky. You cannot just use any cone 6 body and expect to make ware of the same durability at cone 5. White-burning bodies, where the feldspar percentage is already maxed-out to get them to vitrify at cone 6, are most impacted by firing them lower. Any cone 6 body that already has a significant porosity is only going to see it go higher at cone 5. That being said, a fully vitrified cone 6 porcelain easily qualifies as a white stoneware at cone 5. Buff burning bodies high in ball clay can be made to vitrify easily at cone 5 since there is plenty of room for extra feldspar. Brown and red burning bodies will loose color at cone 5. That being said, they are easiest of all to modify for cone 5 (and even lower) since they usually contain red-burning terra cotta clays that both plastify and flux the body, increase the percentage of these moves the vitrification range downward. Producers that supply photos of the body color at many cones make assessment for cone 5 much easier.

Is this cone 6 pottery clay suitable at cone 5? 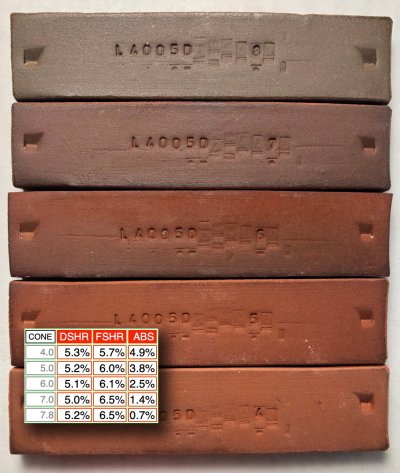 It is actually possible to assess that by looking at fired color and porosity data for the body. This is L4005D, a casting body. These SHAB test bars show it fired from cone 8 (top) down to cone 4 (bottom). The data shown shows it reaches maximum fired shrinkage at cone 7. Its porosity of 2.5% at cone 6 increases greatly to 3.7% by cone 5. So this body is likely not suitable for functional ware at cone 5 (unless glazes are guaranteed not to craze to prevent leaking). At cone 7 the porosity is lower, 1.4%, but it is also likely to warp during firing at that temperature (its point of maximum fired shrinkage). Cone 6 is the targeted temperature for this body and the one at which it should be fired. 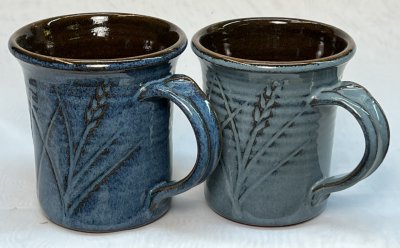 The mug on the left was fired to cone 6 using the PLC6DS drop-and-hold schedule. The one on the right was fired using the drop-and-hold slow-cool C5DHSC schedule. This is the same body, Plainsman M390. The most visible difference is the outside GR6-M glaze, it is turning out a little different at cone 5, firing a lighter less variegated blue. That being said, it sometimes turns out that way at cone 6 also, so there may be other factors. However a more important difference is the inside glaze, L3500G. Notice how much more glassy and perfect it is. How is it possible to be so much better at cone 5 than cone 6? The slow-cool is the answer, that firing drops at 150F/hr from 2100F to 1400F.

The glossiest slipperiest glaze ever at middle temperature 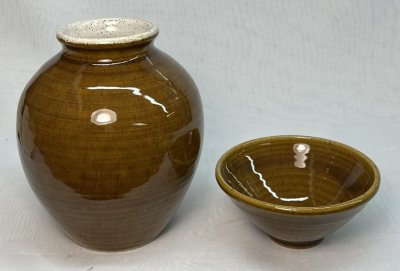 This is G3903, a variation on the GA6-A base Alberta Slip honey glaze for cone 6 (but these pieces are fired at cone 5). Its secret is Fusion Frit FZ-16 (high in both B2O3 and ZnO), this is the lowest melting frit we have ever seen. The 20% frit in this recipe is excessive for cone 6, likely 15% or even less would do. Even at cone 4 the glaze is super glossy at the 20% level. An amazing aspect is its slipperiness: Glazed test tiles of this cannot be stacked, they just slide off each other! Put a few coins in that bowl, move it around a little and they slide around and just fly right out! And, I must hold pieces tightly or they will slide out of my hands. Given that this glaze is 80% of a raw native clay and the pieces are made from M340S it is amazing that this small percentage of frit could produce such a brilliant surface. Notice also that it washes away the manganese speckle. Please note: We do not yet stock this at Plainsman Clays (but I am working on it).