Majolica is white opaque glazed red earthenware clay having colored overglaze decoration. But if you know more about what it is technically you will have more control of your product.

Majolica is pottery, almost always decorative and non-functional, fired to a low temperature, employing a red-burning terra cotta clay, covered with a soft opaque white glaze and decorated with colored overglazes. Historically, majolica glazes (or tin glazed earthenware) were opacified using Tin Oxide, but now Zirconium silicate is most often substituted for some or all of the tin. Metallic overglazes are brightest at low temperatures and the zircon/tin white glaze provides an ideal canvas for them. Colorant formulations (mixtures of stain powders, melters, hardeners, fillers) need to be tuned to melt enough so that they become one with the glaze below, but not so much that they bleed excessively at the edge of brush strokes. Different families of stains have different melting behaviors and chemistry requirements for the host glaze and medium (the color development and degree of melting in the final firing product depend on this). You can buy premixed majolica colors and often these work well..

Ware made using the Majolica process is not strong, the clays generally have 10% porosity or more (fired at cone 06-04). This low temperature means that the body-glaze interface is much less developed than for stoneware (so the glaze is not stuck on nearly as well). And, since the glaze is applied so thickly, it has more power to impose its thermal expansion and craze or shiver if it does not fit the body. It is thus important that the thermal expansion of the glaze be matched to the body. Of course ware is not as durable in use so any bare sections will absorb water and tend to water-log the piece over time. It is thus best to make a foot ring so that the entire piece can be glazed, leaving only a narrow channel of exposed body to touch the kiln shelf.

Even application of the base white glaze is critical to the success. This is not possible using paint-on commercial glazes, pieces must be dipped to get, not just even enough coverage, but thick enough. What does "thick enough" mean? It means twice as thick as you thought, far thicker than anything you have ever done. That means it is necessary to mix your own white dipping glaze in quantities sufficient to be able to dip the largest pieces. Dipping can be for 10 or 20 seconds instead of the normal 2-3 seconds! And you need to be able to adjust the rheology of the slurry to get good dipped results. If not, plenty of touch-up time will be required to repair any drips or areas of thicker coverage.

People have different strategies for keeping the glaze in suspension (e.g. the addition of epsom salts to make the slurry thixotropic). Consider this: Since it goes on so thick, if it tries to shrink too much will it have the power to pull itself off and flake? Thus the amount of, and type of, kaolin used is important. Too little kaolin and the glaze will be too powdery, too much and it will shrink excessively. Since fix-up work is commonly needed to remove drips, the glaze must adhere well enough to hang on while you carve away at the surface. If adherence becomes an issue it might be necessary to add some CMC gum, enough to improve adherence and dry hardness but not so much that drying is too slow and a thick enough layer cannot be achieved.

Majolica glaze is remarkably stable as a melt, it stays put, without running. This is why it can be applied so thickly. Yet fires glossy. It is not clear exactly what the mechanism of melt-stiffening is, but it would appear that the high zircon content plays a major role. Ferro Frit 3124 is the one we have most commonly seen in recipes. Ideally it would be good if a fully fritted glaze base could be employed (only frit and kaolin, e.g. G1916Q). However, majolica glazes in common use also have additions of feldspar. This seems like an odd thing to incorporate since the material will not dissolve in the melt at such a low temperature, and it will increase thermal expansion. But the feldspar could be part of the melt-stiffening mechanism and its addition does not impact gloss. That being said, it may also be that 15% zircon in a fully fritted glaze would be enough to stiffen the melt.

Spectrum Glazes makes an excellent line of colored Majolica glazes. These can act both as a stand-alone glaze and as the colors for doing the on-glaze decoration. Typically it is best to use a dipping white that you make yourself and then decorate with these.

Some people add frit to the body, to increase its fired strength. And improve the clay:glaze interface. Such bodies need to be bisque fired much lower (e.g. 200F or more) or they will not be absorbent enough to hold on to the glaze. And it is doubly important that the glaze fits a fritted body, especially that it is not under too much compression. While the thick majolica glaze layer has more power to impose its thermal expansion, the fritted body also has more strength to resist. When the failure finally occurs, it will play out in a fashion more spectacular than simple crazing or shivering: Spontaneous fractures and explosions! With sound effects. Using an expansion-adjustable bases glaze and doing testing is the best way to assure that your clay and glaze are compatible. The EBCT test might work well for this. 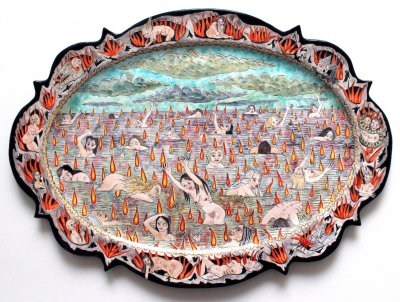 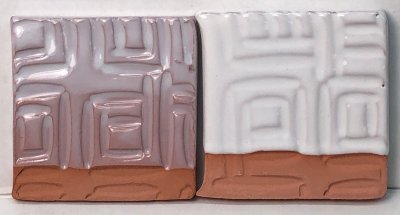 Tin oxide is a powerful opacifier, but the 5% in the glaze on the left is clearly not enough. 10% more zircon had to be added to produce the one on the right. 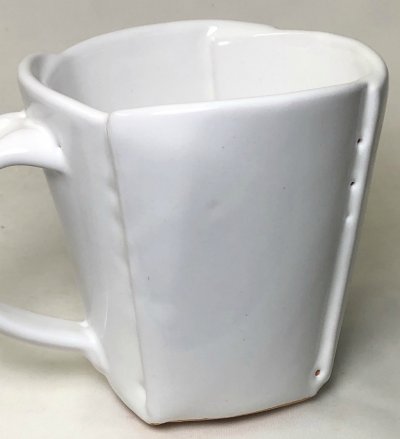 This is Linda Arbuckle's base recipe (66% frit 3124, 23% feldspar, 13 kaolin/bentonite, 9 zircon, 4 tin oxide mixed to 1.62 specific gravity). It is fired at cone 05 creating a super gloss. This is applied very, very thickly (double the thickness of what a stoneware glaze would be). Yet notice how the air-vent holes did not heal during firing, these would have filled in easily had this been on stoneware or porcelain. For this reason, majolica glazes must be applied to ware not having any abrupt concave contours (this also happened on the handle-joins and where foot-meets-wall inside). Bisque must be clean to assure good adherence. Any glaze coverage issues must be repaired carefully before firing. This piece was bisque fired at cone 06, that is the reason for the air vent holes. Had it been bisque fired at cone 04 (higher than the glaze firing) these would not have occurred. However that would have extended the dip-time, this one was held under 10 seconds whereas a cone 04 bisque would have required 20 seconds. 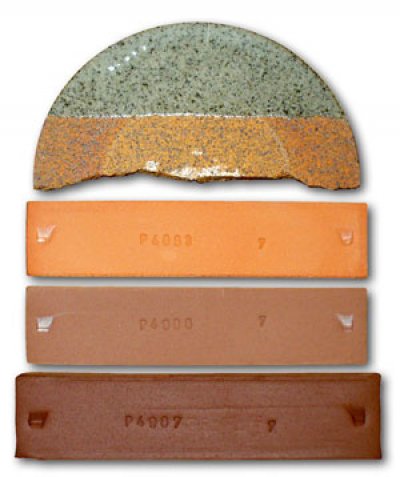 Bottom: cone 2, next up: cone 02, next up: cone 04. You can see varying levels of maturity (or vitrification). It is common for terra cotta clays to fire like this, from a light red at cone 06 and then darkening progressively as the temperature rises. Typical materials develop deep red color around cone 02 and then turn brown and begin to expand as the temperature continues to rise past that (the bottom bar appears stable but it has expanded alot, this is a precursor to looming rapid melting). The top disk is a cone 10R clay. It shares an attribute with the cone 02 terra cotta. Its variegated brown and red coloration actually depends on it not being mature, having a 4-5% porosity. If it were fired higher it would turn solid chocolate brown like the over-fired terra cotta at the bottom. 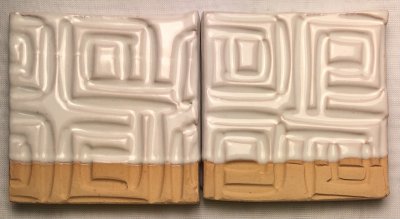 Fusion Frit F-19 is claimed to be a substitute for Ferro Frit 3124. The glaze was applied on Plainsman L210. Not as thick as would be customary on Majolica ware. Left is with frit 3124, right is with the Fusion product.