Engobes must be drying, firing and thermal expansion compatible with the body they are on. Engobe are body-like, they do not melt, they are not glazes. That means they have a less developed interface with the body. Thus it is doubly important to fit them as well as possible to avoid flake-off in response to mechanical or thermal stress (this is serious if it happens on functional ware having a glaze over the engobe, sharp flakes of glaze could enter food or drink). Thousands of tons of engobes are used in the tile industry and it is also vital that they fit properly.

This test gives the engobe much more thickness than it would normally have to amplify differences between it and the body. The test is done by preparing, drying and firing multiple bi-clay strips (thin sandwiches of body and engobe) and observing the way they bend during the processes. Extreme bends indicate incompatibility. When fit to a plastic clay body is being tested, the engobe must be dewatered and brought to the same stiffness as the body. Then they are individually rolled to slabs of 1/8" thickness, sandwiched and cut into and 8x5 inch size. That slab is then rolled back down to 1/8" thickness. To avoid one side being thinner than the other, the slab should be lightly rolled on one side, turned over and rolled again. Do this repeatedly until the 1/8" thickness is achieved.

Finally, cut bars four bars to 1 x 5.5". Lay two of them with engobe side up and two with body side up. Dry them and measure the amount of warp of each to get an average. Record that. Fire them and repeat the measurements and record.

Ideally, the bar should bend slightly toward the body, putting the engobe under a little compression.

Bi-Clay strips have curled during drying. But there is a problem.

The front bar was dried with the white engobe upward, the rear one with it downward (an EBCT test). While both have curled toward the red body, the front one has done so less. To enter the results we will average the amount of bend. But there is another problem. During rolling, the white body thinned more and is thus not as thick as the red. Thus there is question about whether the bend is because of this or because of higher shrinkage of the red.

Should you use a porcelain as an engobe on stoneware?

This is how bad the fit can actually be. In the front is a bi-clay EBCT test strip of a grogged cone 10R sculpture clay sandwiched with a porcelain. After drying this bar was relatively straight. But during firing the porcelain has a much higher fired shrinkage and it pulls the bar toward itself. During cooling, the sculpture clay has a higher thermal expansion and it pushes from its side bending the bar further. This bar is a bomb of internal stresses, just waiting for a mechanical or thermal stress to bust it into a hundred pieces. Admittedly, putting a thin layer of this onto a piece of heavy ware is not going to bend it. But will it flake off when exposed to stresses (like freeze thaw, being put in an oven, having a hot liquid poured into it, being bumped). 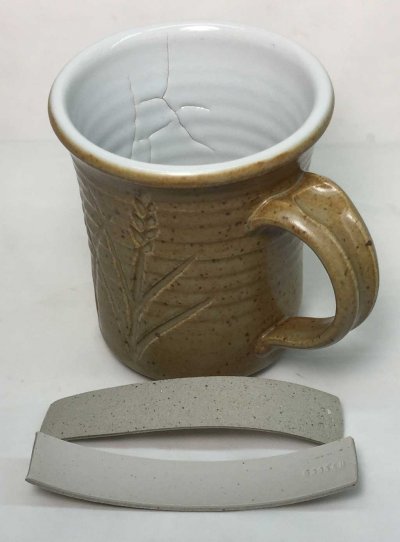 The EBCT test bars (engobe compatibility) in the foreground demonstrate the issue (they sandwich the engobe and body as a bi-clay strip). After firing at cone 10R they have curled toward the engobe side, indicating that it is shrinking more. On the mug the engobe has done likewise, shrinking more than the body and creating a crack pattern.

The difference between a slip and an engobe 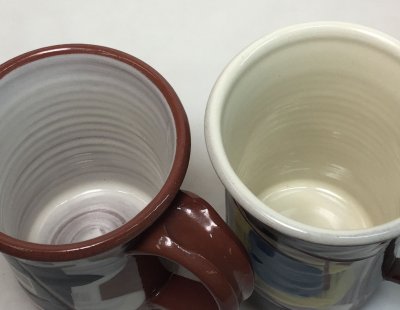 L3685U slurry was applied to the insides of both of these mugs. But on the left it is a "slip", on the right an "engobe". Why? The left mug only has a thin layer, applied by painting a gummed version on (at leather hard stage). On the right a gelled slurry was poured into the leather hard piece, poured out and the rim dipped (creating a much thicker layer with more power to impose its own drying and firing shrinkage). So it is much more important that the latter be compatible with the underlying body. The EBCT test is used to measure how compatible the body and engobe are.

Indicate direction of bend and whether toward A or B

Indicate direction of bend and whether toward A or B