Common washed wood ash has a chemistry akin to a ceramic glaze, so it can comprise significant percentages in a recipe. Plus it can produce unique visual effects.

A glaze that employs organic ash (e.g. paper, wood) as a supplier of oxides (e.g. silica, alumina, soda, calcia). Ashes are generally flaky and fibrous and cannot be screened well, this consistency contributes to variegation in the color and texture of the fired surface. Many pottery books deal with the preparation (washing) of organic ash batches (these materials are caustic). It can be difficult to separate the ash from the unburned material so it may be necessary to calcine it. Consistency in firing is poor, so this type of glaze is only suitable for potters.

Many recipes call for wood ash. But there is a problem with this. The chemistry of different organic ash types varies dramatically for different types of wood. But also for different batches of the same wood. And, more often than not, the type of wood it is not even known. Or, it is a mix of different types of wood. If a recipe only calls for a small percentage of wood ash (e.g. less than 10%) this might not be a problem. But for larger percentages the chances of your recipe firing the same as the picture is very low.

There is a completely different philosophy to using wood ash as a glaze ingredient: Develop your own recipe using the highest practical percentage of ash possible. To do this, accumulate a large batch (e.g. 20 lbs), mix it well and then do blending experiments with kaolin, feldspar and silica to develop a good glaze. The higher the ash percentage the thicker the slurry will be and the more water it will require. It is thus best to employ plenty of kaolin to help with slurry rheology.

Many potters employ fake ash glazes, these are formulated to emulate the appearance of an ash glaze without the hassles of actually using the it. These gazes typically are active melters and form a fine crystal mesh (which can require a long cooling period in the kiln, up to 24 hours). 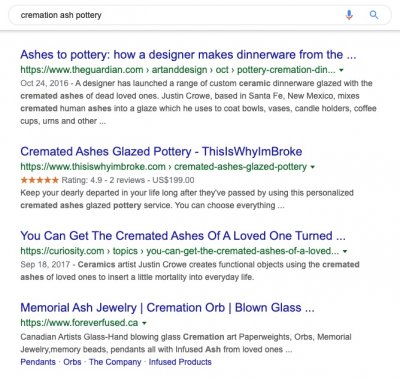 As you can see from the search, this is becoming "a thing". The ash is being incorporated into both clay bodies and glazes. The ash of pets and humans. If you are a potter wondering about doing this here are a few tips. Do testing, better to use up some of the ash for that than have to throw away the ware you make! If the ash has not been ground (likely the case for pets) there will be bone fragments, these won't melt so need to be removed for glazes (by sieving or ball milling). For wedging into the body, testing will be needed (consider the possibility of lime-popping). Be careful to write down your procedure during testing so that production does not bring surprises. While you can add ash to commercial bottled glazes, the percentage will be low. If you make your own dipping glaze, 50% ash should be possible. Do tests without colorants to get a base glaze that is melting well and does not crawl. Add stain powders to test colors, zircon and titanium dioxide to opacify (the latter will variegate more). Color and opacifier additions can introduce crawling, test these well also. 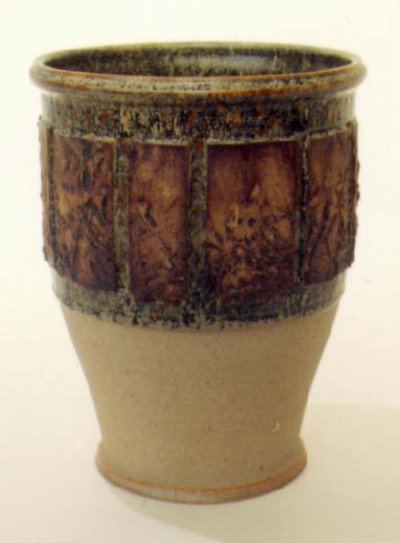 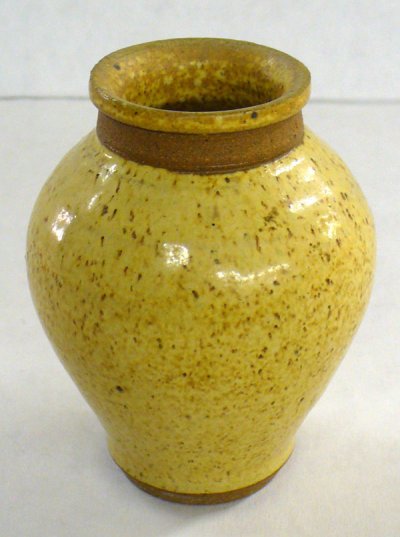 Plainsman M332 with a wood ash glaze fired at cone 6. By Tony Hansen. 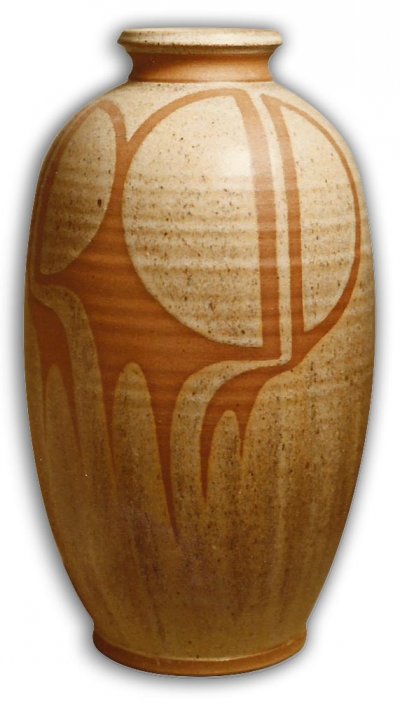 The pattern was painted using wax resist and the glaze applied by pouring.

How to create a wood ash glaze 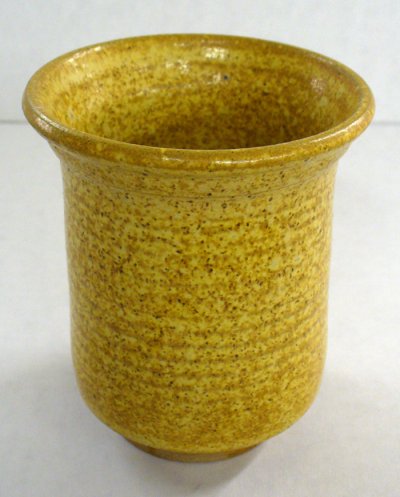 It makes sense to maximize the percentage of wood ash. Since different batches and types of wood ash have drastically different chemistries how can you have a glaze have a high percentage? This glaze was the product of preparing a large ash batch and a project to develop a glaze specifically from it. This one contains a little iron to stain it brown, this brings out the variegation better. Ash generally contains low percentages of Al2O3, a critical oxide needed for stable glass development. I added kaolin (about 20%), it suspends the slurry and supplies Al2O3. Ashes contain lots of fluxing oxides, but they still may need a little help to melt a glaze at cone 6, so I added feldspar (it also supplies needed Al2O3 also). If that is not enough flux, I add a little gerstley borate or a borax frit. If crazing occurs silica is needed. In the end I got a recipe with about 50% ash. 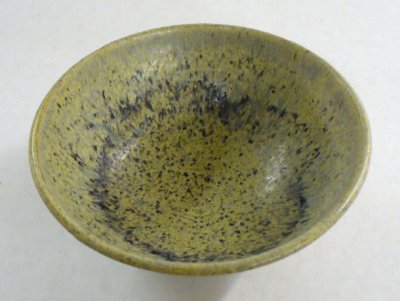 It contains no iron but does have a little cobalt. The ash is about 50%, with 20% kaolin and 25% feldspar and a little rutile. However your ash will be different so you will have to do your own development program.