Knowing the distribution of particle sizes in a ceramic material is often very important in assessing its function and suitability for an application.

When minerals and mixtures of minerals are ground into a powder a particle size distribution is produced, that is, populations of particles of various sizes. The relative sizes of these populations can be measured to rationalize the behavior of the powder in the ceramic process.

Wide distributions of sizes in a clay, for example, produce the most density in the dried product. When the particles are all of similar sizes, a less dense matrix is produced. Clays of higher density are stronger in the dry form. Particle size distribution (PSD) measurements are an excellent way to characterize a material for quality control purposes. When problems occur in a ceramic process, particle size distribution information about the materials and body can help explain the causes. PSD information is also critical to spot wear in grinding equipment. Data sheets of most ceramic minerals contain at least some PSD information. 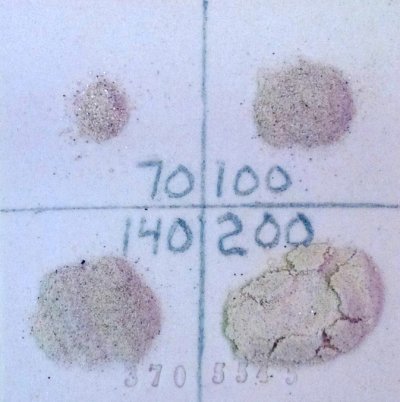 These are the oversize particles (from the 79, 100, 140 and 200 mesh sieves) from 100 grams of a commercial Gleason ball clay. They have been fired to cone 8 oxidation. There is 1.5 grams total, this is within the limits stated on their data sheet even though the material is sold as 200 mesh grade. Firing the samples shows whether the particles contain iron that will produce specking in porcelains and whiteware. In this case there are a few. We do this test on many materials and this is typical of what we see. 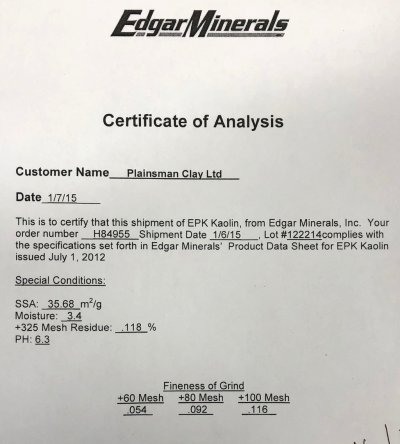 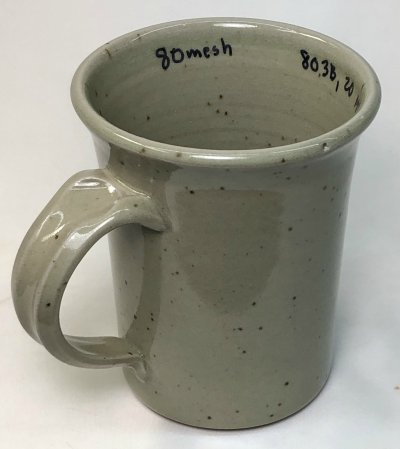 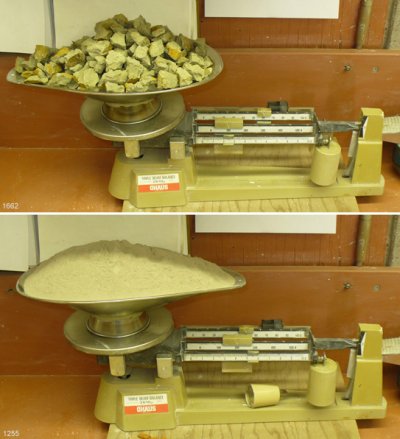 A root-of-two series of test sieves 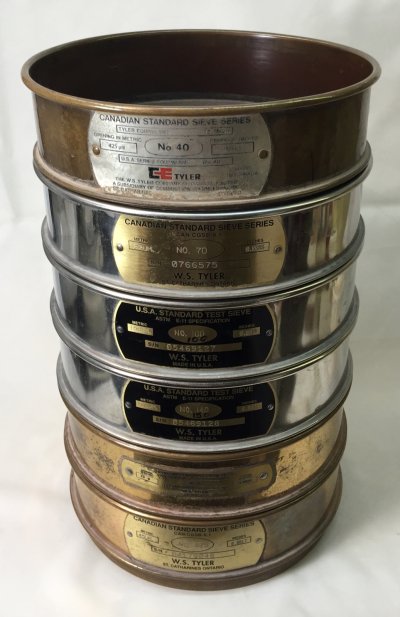 The coarsest screen is at the top, the finest on the bottom. The opening for each is shown on the label. They are chosen such that each successive screen going down has an opening that is about half the area of the one above it. Using this series you can produce a practical measurement of the distribution of particle sizes in ceramic materials and bodies used in traditional ceramics (structural products industries, like brick, measure coarser particles than this, starting at perhaps 10 mesh and ending at 70). The 325 screen on the bottom is only used sometimes, it is difficult to finer-that-325 particles to pass through it because it blinds. It is not possible to shake powder through sieves that are this fine, samples must be washed through. We use the SIEV test to log results. 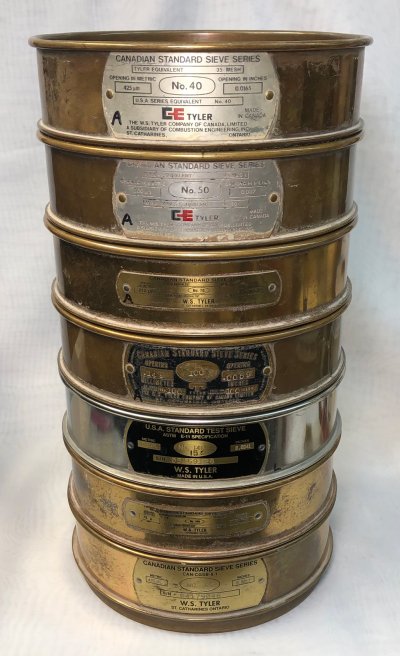 The coarsest screen at the top has an opening of 425 microns (that means that 425 micron and finer particles will pass through it, and, conversely, plus 425 micron particles will not pass). It's opening has an area of 180,000 square microns (425x425). Going downward, the openings on each screen have areas half that of the one above. Thus, for the second screen down, the opening area is 90,000 microns. Standardized sieves like this are essential to the study, classification and maintenance of powdered materials. In Insight-live the SIEV test uses this series of sieves. 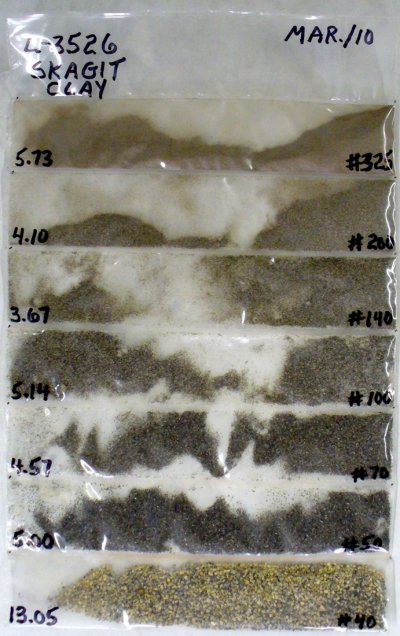 This appears to be a drying crack, but it is not 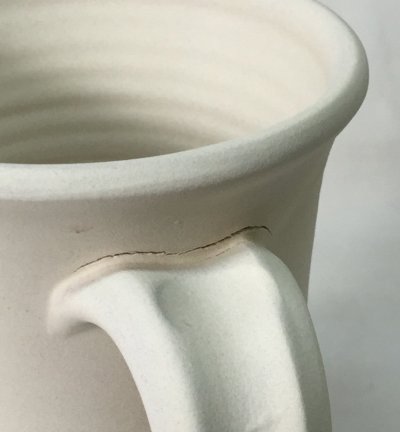 This clay normally dries well, but not this time. Strangely, this crack is not at the handle join, it is penetrating into the mug wall. Actually, this is not a crack, it is a split. Excessive slip around the join was not removed, that is bad when a body has larger particles, they permit water left on the surface to penetrate inward and begin a split. An aggravating factor was that the handle was allowed to dry faster than the mug itself, pulling at this join and opening the split even more. 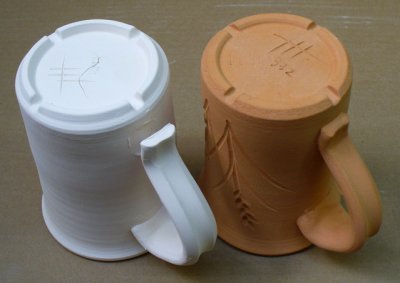 Chart of residue on 325mesh common for different glaze types 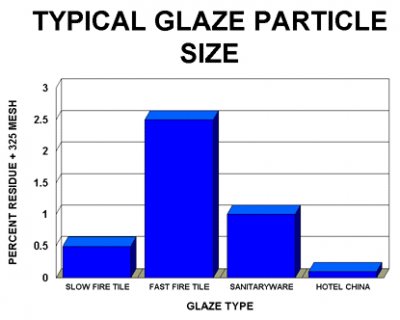 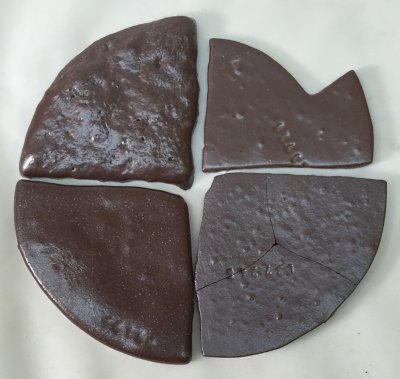 These are four terra cotta body disks that have been fired to cone 10 reduction. The fluxing action of the iron has assisted to take them well along in melting. Notice that one is hardly bubbling at all, it is Redart clay that has been ground to 200 mesh (the lower right one is a body mix of 200 mesh materials also containing it). The upper left one is bubbling alot more. Why? Not just because it is melted more (in fact, the one on the lower left is the most melted). It is a body made from clays that have been ground to 42 mesh. Among the particles are larger ones that generate gases as they decompose. Yes, the particles in the others do the same, but their smaller size enables earlier decomposition and expulsion of smaller gas amounts distributed at many more vents. Some bodies cannot be fired to a point of zero porosity, they will bubble before they get there.