In ceramic technology the term 'glass' is contrasted with the crystalline state, it is seen as a "super-cooled liquid". When crystalline materials solidify the molecules have opportunity to orient themselves in the preferred pattern during freezing whereas in a glass the random orientation of molecules is frozen into the solid. The most familiar glass in ceramic is of course glazes. However all non-refractory bodies also contain glass as a product of the melting of feldspar particles (and other minerals) between the grains of refractory particles (like quartz, alumina minerals). This micro-glass cements the mass of non-melted particles together and imparts more and more density to the matrix as it is fired higher.

In ceramics, glass is the preferred structure and it naturally forms because cooling cycles are rapid. In nature, cooling cycles are slow and rock crystallizes by virtue of the long periods of time it has to cool. This crystallization has produced much of the tremendous range of natural minerals we find in nature.

"Ceramics for the Potter - University of Toronto Press" 1952 called it "silica and two or more bases, which are combined under heat to form a molten solution. On cooling, the solution becomes so viscous that the molecules cannot move about freely enough to form crystals before the state of rigidity is reached. If glass were allowed to cool slowly, it would be as crystallized and as opaque as granite - it is the fast cooling, with the viscosity, that makes glass transparent. Glass is, in short, a solid solution."
In 1945 the American Society for Testing Materials suggested the following definition if glass: "Glass is an inorganic product of fusion which has cooled to a rigid condition without crystallizing."

In 1962 the British Standards Institution adopted the same phraseology. Later more complex methods of producing this state led to revisions such as: "Glass is a non-crystalline solid" and....."glass is an x-ray amorphous material which exhibits the glass transition.."

Which one contains more SiO2?

These cone 04 glazes both have 50% Gerstley Borate. The other 50% in the one on the left is PV Clay, a very low melting plastic feldspar. On the right, the other 50% is silica and kaolin, both very refractory materials. Yet the glaze on the right is melting far better. How is that possible? Likely because the silica and kaolin are supplying Al2O3 and SiO2, exactly the oxides that Gerstley Borate needs to form a good glass. 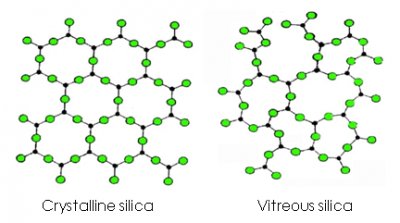 Several things are needed for high silica glazes to crystallize as they cool. First a sufficiently fluid melt in which molecules can be mobile enough to assume their preferred connections. Second, cooling slowly enough to give them time to do this. Third, the slow cooling needs to occur at the temperature at which this best happens. Silica is highly crystallizable, melts of pure silica must be cooled very quickly to prevent crystallization. But Al2O3, and other oxides, disrupt the silicate hexagonal structure, making the glaze more resistant to crystallization.