Lead is a melter in ceramic glazes and performs exceptionally well. However recent findings show it to be even more environmentally pervasive and toxic at low levels than originally thought

Lead is a melter in ceramic glazes and performs exceptionally well at low temperatures. In fact it makes very low fired terra cotta ware possible in many countries (that would otherwise be impossible). It is available in frits so the raw lead oxides can be completely avoided, thus greatly reducing the exposure experienced by production personal. However recent findings show it to be much more environmentally pervasive and toxic at low levels than originally thought.

Lead release in glazed ware is a critical thing to consider if you make ware at low temperatures and employ lead based materials. The entire ceramic industry has been forced to progressively move away from leaded glazes and colors over the past decade. It is important to realize that using lead frits does not make lead glazes safe, it just makes handling lead glazes safer. The solubility of the fired glaze is dependent on its chemistry and the way it is fired. If you do not know a formula for a frit you are using, check it out, do not assume it is lead free.

While it is possible to test a glaze for lead release; measuring the low levels, getting accuracy and interpreting the data is far beyond the average person (or anyone not having extensive experience with such testing in a ceramic setting). Following are some notes kindly supplied by David Lewis about the newest findings regarding lead.

The CDC publised a revised view of lead in 2012.

I was a potter for a decade or so in the 1970s and early 1980s. I used lead a bit experimentally but never produced ware for sale with it. I also lived near Canada's largest lead smelter in Trail BC and sometimes worked there on maintenance crews to support myself as I wasn't bringing in $$ selling pottery. Lead had been on my mind in the past, and I had researched to find out how dangerous it was.

After the lead in Flint water situation hit the news, I researched lead again and found my 1970s knowledge was completely outdated.

Because the average blood lead level in US children has declined dramatically from decades ago when lead was in gasoline, paint and plumbing, not to mention ceramics, researchers have had easier access to children with what were formerly regarded as "low" lead levels in their bodies. They haven't found a threshold level below which there is no harm. Also, if you take a child with today's average "low" blood lead level and study what happens if that level is increased a little bit, to what was decades ago thought to be a level so low there couldn't possibly be any harm as a result, the result is, a decline in I.Q. greater than if you take a child with ten times as much lead and add a bit more. I.e. the greatest harm to a population exposed to lead occurs when very low levels of lead increase a bit. Damage is thought to be irreversible. What a population wide decline in I.Q. means is less gifted children, more retarded children, and everyone is less mentally capable than they otherwise would have been.

There was a scientist who wanted to determine the precise age of the Earth who needed to measure lead more accurately than it had ever been measured before, Clair Patterson. He discovered that human beings in the pre industrial age had hundreds to thousands of times less lead in their bodies than typical modern urban humans such as citizens of North America, etc. He discovered that emissions of lead from the use of leaded gasoline have contaminated the entire planet, i.e. there is far more in the layers of the global ocean that have been exposed to the atmosphere recently compared to the layers not so exposed. It isn't that there are massive quantities per gallon of sea water, or per ton of urban soil, but there is enough that humans have been contaminated 100 - 1000x what they evolved to cope with. Search on "patterson measles figure caltech" to see a graphical representation of Patterson's discovery.

Couple Patterson's work to the discovery that the greatest rate of damage occurs at very low levels, and throw in that it is dawning that the damage is irreversible and you have the modern view of lead. There is no place in human biology for lead. It substitutes for calcium in nerve pathways and basically screws things up. Other systems are affected as well. We did not evolve an efficient system to rid our bodies of the amounts of lead we are exposed to now.

This is why the CDC has now published its statement that there is no level of lead that is "safe", and it has lowered its "reference" level which it wants people to get upset about if they discover their children testing higher than to a fraction of what it was when we were children. Lead is so widespread that reducing human exposure to anything close to pre industrial levels may not be economically feasible, especially given all the other problems civilization is faced with, however, all authorities are setting policy to encourage people to reduce whatever chances of exposure they are causing, then to reduce that again.

The brilliant, glossy surface of a lead-glazed tile 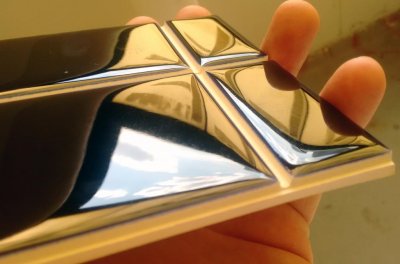 Lead glazes have brilliant surfaces and respond very well to colorants, even when they are occur in high enough percentages to produce metallic colors. Courtesy of Cory Lund.

This demonstrates the amazing melt behaviour of lead-as-a-flux for ceramic glazes. Not only does it melt early, but it softens slowly over a 300F range of temperatures before it goes off the end of the runway on this GLFL test. Then, when fired 200F hotter than that, it remains a stable, clear and uncrazed glass. Beginning around 1750F, this becomes a transparent glaze, by itself. 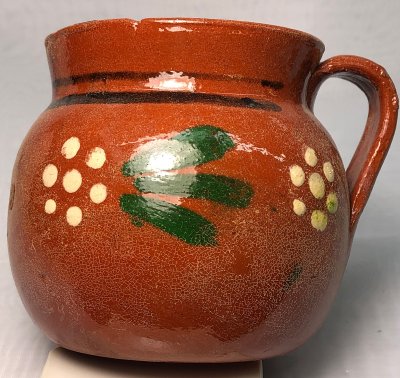 This is a piece of traditional Mexican terra cotta with a lead bisilicate glaze. It is fired at at least 1850F. We did a leaching test on the inside, using vinegar. The entire inside surface was altered to the point it appeared the glaze had dissolved away! Then that vinegar migrated outward through the porous walls, came through the craze lines in the outer glaze (which were not visible before), and on evaporation left the lead behind in the crazing pattern! So, while low expansion lead glazes might fit out of the kiln, after water-logging a piece and it will expand and craze the glaze anyway.