3D printing is very important in ceramics, hobby and industry. A slicer is software that slices up a 3D model and runs the printer to lay down each layer.

Slicing software converts a 3D model (drawn by Fusion 360 or other 3D designer) into G-Code that a printer can understand. The G-Code contains head movement and temperature instructions. Many free and paid products are available. They can exist because of standards developed over the years in the 3D design industry. Slicers handle infills (e.g. a honeycomb pattern instead of printing pieces solid) and print supports to hold up sections that flare outward (it cannot print on thin air!).

While each 3D design package saves files in its own optimized format (e.g. F3D for Fusion 360), it can also export 3D geometry into standardized formats that other slicers can import (e.g. STL, 3MF). While standard formats have limitations, historically they have enabled the companies producing 3D design software to focus specifically on that and offload the highly complex slicing task (and driving the hundreds of available 3D printers) to other companies.

I have experience with Slic3r, Simplify 3D and Cura. I drive my cheap 3D printer via USB cable using Simplify 3D (it costs about $150), that machine was frustrating to get it working but this slicer eased things (it is very good at automatically generating support, has drivers for hundreds of printers and has an incredible number of options). On my Prusa MK3S I use their custom version of Sli3r (they call it Prusa Slicer and its free). Through its default settings and easier interface I have discovered rafts, and better fills, better overhang printing and the advantages of printing to an SD-card and letting the printer handle everything. One issue with printing is that sometimes models are not "air tight". Some slicers simply fail the print, others are able to join any unconnected lines and print the item anyway (that is one thing you get when you spend extra money).

Slicer software can also handle the burden of updating the software in a 3D printer. Typically, when the slicer itself updates online, it downloads the printer software updater also. The next time you print via USB (or you insert an SD card) the printer notices the presence of an updater and asks if you wish to proceed with it. For the Prusa i3, this process is very easy. 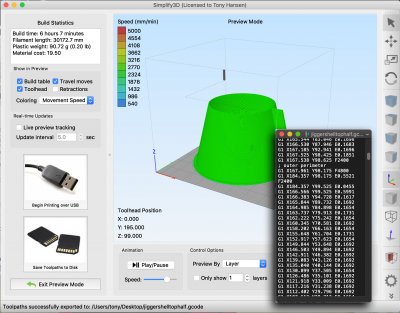 Simplify3D knows how to convert the 3D geometry generated by Fusion 360 into G-Code (shown in the black text window lower right). I have just told Fusion 360 to print this and it automatically launched this and passed the 3D geometry to it. Simplify3D is a "slicer" because it knows how to convert a 3D object into slices that a 3D printer can lay down (one on top of the other). Simplify3D is fairly expensive and competes with a number of free products (like Slic3r, Cura). It gives me a 3D view of the object and enables positioning and rotating it on the bed and configuring dozens of parameters. It is about to deliver the G-Code (via a USB connection) to my RepRap 3D printer (although it is often preferable to use the "Save Toothpaths to Disk" button to generate G-Code and write it to an SDCard which the printer can accept). The black text-edit window shows what the G-Code looks like. It is just text. With hundreds of thousands of commands that mostly move the head to successive X-Y positions and a defined filament feed-rate.