In glaze chemistry, the oxide is the basic unit of formulas and analyses. Knowledge of what materials supply an oxide and of how it affects the fired glass or glaze is a key to control.

An oxide is a combination of oxygen and another element. There are only about ten common oxides that we need to learn about (most glazes have half that number). CaO (a flux), SiO2 (a glass former) and Al2O3 (an intermediate) are examples of oxides. CaO (calcium oxide or calcia), for example, is contributed by calcium carbonate, wollastonite and dolomite.

The heat in the kiln "decomposes" materials into their oxides. This decomposition breaks the bonds that held the oxides together in their materials creating a liquid "melt" (or mixture) of unbonded oxide molecules (ready to form a new compound, normally a glass, when the kiln cools). This phenomena occurs because the molecular bonds that hold oxides together are stronger than those that hold oxides one-to-another.

There are direct links between the oxide chemistry of a glaze and its fired presence, each oxide imposes specific properties (according to its concentration) on the fired glass. Its effects can be modified by interactions. Glaze chemistry is about looking at mixtures of raw material powders as if they were already the fired glaze. It does an inventory of all the oxides being contributed by all the materials, discards the ones that will gas off during firing (e.g. CO2, SO4, H2O) and tries to visualize what glass will be like.

A glaze "chemical formula" expresses relative oxide molecule numbers in the fired glass (a "chemical analyses" expresses the concentration of each oxide, by weight of molecules, in a material). Oxides are divided into three categories that recognize their functions. There is a correlation between the amount of oxygen in each class and the contribution that class of oxide makes. Fluxes are designated RO, intermediates R2O3 and glass formers RO2. When the links between how a glaze fires and its oxide formula are well understood, the glaze formula can be manipulated to produce the desired changes in the fired properties.

"Target Formulas" (or limit formulas) characterize the balances of oxides in a type of glaze (e.g. low temperature, crystalline, matte). However limit formulas are general guides only, they express what is likely to melt into a usable glaze.

Glazes for lower temperatures have more flux. We see that in unity formulas as lower SiO2 and Al2O3. Some of the properties that oxides contribute can be quantified. Thermal expansion is an example. Na2O, for example, has a very high expansion. SiO2 is low. We know the thermal expansion of each oxide, thus it is fairly simple to tabulate their expansions, according to percentage, to predict the thermal expansion of the glaze (high expansion glazes craze). When the SiO2:Al2O3 ratio is high (e.g. 12:1) the glaze will likely be glossy (matte when low). If MgO is 0.3 or higher (in a unity formula) the glaze will likely be matte. If Al2O3 is low the glaze melt will be runny. If SiO2 is also low it will melt at a low temperature. 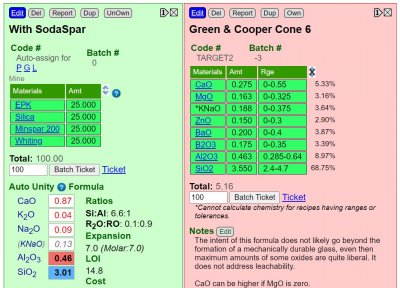 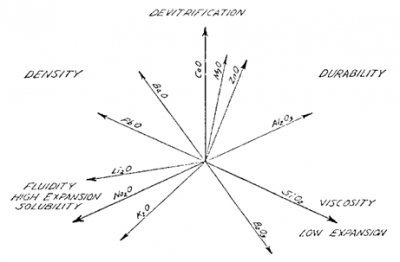 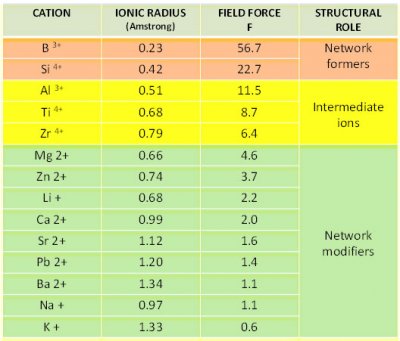