Cones have been a traditional way of measuring the temperature ceramic kilns for many decades. Plaques are the setters that hold the cones at the right angle.

A stand or rest for holding cones during firing. Plaques are important to assure that cones are placed at a consistent depth and angle firing after firing. 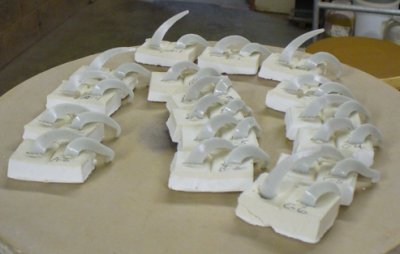 Cone plaques and cones from a cone 10R firing at Plainsman Clays.

What temperature do Orton cones actually go to in my kiln? 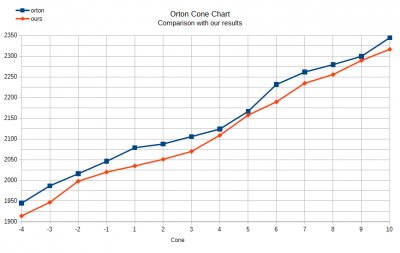 The blue line on this graph represents numbers from the Orton cone chart for 108F/hr. It is not as straight as what I expected. The red line is the temperature measurements that we have recorded after many test firings at each temperature. We use large cones in these firings and finish the firings manually to shut the kiln off just before the firing cone touches. These are now target temperatures that we use for automatically firing each temperature.