The use of some traditional firing techniques is still popular among modern potters and sculptors (who are accustomed electric and gas kilns, often with computer controllers).

Most potters and sculptors fire in electric or gas kilns, these are often computer-controlled. However the use of traditional techniques, some very ancient, is still very popular. It is in this sense we use the term "primitive firing" (not because it does not use technology!). The scope of techniques is as wide as the world and its history. Each culture developed its methods around the clay and fuel and utilitarian and aethetics needs it had. In many places in the world these techniques have survived to the present day with little change (e.g. India, Africa) and are well documented in books, sites and Youtube.com.

Many ancient cultures produced pottery at large, even industrial scales, using elaborate kilns. However primitive firing methods enabled anyone to fire ware with almost no facilities or resources (e.g. in an open fire, a pit or a basic containment method) using primitive materials (e.g. coarse, non-plastic clay). While potters today consider cone 06 a very low temperature, to ancient potters that would have been a dream temperature! Today potters in the developed world inject the materials, tools and some techniques they have available now into old firing techniques. Obvious differences are the clays people have today, the manner in which they form the ware and the fuel they use to fire. In all, the result is a safer, more reliable and consistent process yet producing ware of similar appearance.

A common technique is the use burnishing to produce a smooth surface (few primitive cultures had glazes) and surprisingly dense and good surfaces can be achieved. These are especially important on food surfaces of the otherwise porous matrix of the clay.

When utility is desired (e.g. ware that can be used over an open flame) terra cotta clays are normally employed. These generally must not be exposed to higher temperatures, the open porous matrix, although not strong, is the key reason the ware can withstand temperature shock. Often grog is added (whereas ancients would have used sand) to impart thermal shock resistance at a hotter temperature (where ware fires harder and stronger). Kilns or containment can be made using the same clays from which the ware is made.

Primitive ware is sintered, not vitrified. While potters today bisque fire their ware at 1800-1900F, primitive cultures would typically have final-fired at much lower temperatures. Even as low as 1000F, clays can sinter to a form that no longer slakes in water (a typical open wood fire can easily achieve temperatures hundreds of degrees hotter than that). If partial containment is employed and fuel varied (e.g. use of sawdust, hard wood) even higher temperatures can be achieved. Many books and websites deal with the intricacies of this type of firing.

One area where modern technology is really needed in primitive pottery is development of clay bodies using materials native to the area. Using an account at insight-live.com you can learn to test and characterize (create a comprehensive report) the traditional bodies used. Then you can find materials in the area and characterize each of them. Finally, using that material knowledge, you can develop and optimize a clay body. Optimal clay bodies have the minimal drying shrinkage, the maximum plasticity, the maximum drying performance and dry strength, the minimum soluble salts, the maximum fired strength, the minimum fired shrinkage and porosity, the maximum thermal shock resistance, the desired color and surface (the traditional body may have had none of these properties optimized). Armed with such a clay body, made from native materials, you will have higher value. Please contact us if you need help using Insight-live to start a such a project. 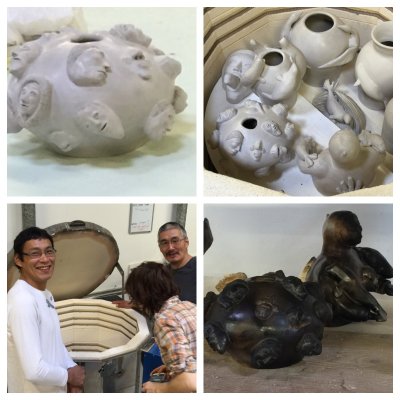 The work of Pierre Aupilardjuk and John Kurok from Rankin Inlet, Nunavut, Canada. They are visiting the Medalta International Artists in Residence program in Alberta during the fall of 2016 to demonstrate their firing technique. First they sculpt the pieces from a medium temperature stoneware (lightly grogged body), then dry and apply terra sigilata. Finally they bisque them. Next they carefully stack items into a 45 gallon drum with fine wood chips filling all spaces. The drum has an expanded metal mesh a few inches up from the bottom, this creates an air space (holes around the outside of this airspace allow air in from the bottom). They light the wood on fire at the top and put the lid on. This burns for a couple days (a hole in the lid permits enough ventilation to enable the wood to slowly burn and smoke. The black finish is glossy and clean.