Ceramic glazes and clay bodies can host micro organisms. They can be just a nuisance, a source of worry or they can render a product useless. What should you do?

Every potter has had the experience of opening a bucket of glaze only to be met with a foul odor; micro organisms of some sort have grown (and maybe died). While it seems odd that they could even have grown in a bucket of water mixed with rock powder, it is an aqueous system and usually at least some carbon is present, especially in the clays. And there is often no shortage of micro organism contamination sources during the mixing process. However, the problem is most often accompanied by slurry issues like settling out, poor application properties, gelling or bubbling. And, unfortunately, fixing the problem is not as easy as just adding some bleach or Dettol. That may or may not remove the odor, but it won’t fix the slurry problems. Typically, a glaze like this is ‘terminal’, like a serious disease diagnosed too late. That is not to say that there exists no additive to correct it, but no one is going to hire a micro biologist to figure whether it is a mold, bacteria, fungus, algae or yeast and what anti-microbial is needed! Glazes used in industry seldom have this issue and it is not because they are used continuously as made, it is because anti-microbials (biocides) are added when they are mixed. Just like with human health, little is needed to prevent growth of micro organisms whereas a lot would be needed to rescue a slurry once they take hold.

All prepared wet glazes made for pottery and hobby markets contain biocidal additives. However the prepared glaze market is small so no additives are specifically made for them. But that is not a problem because other huge product categories like paint, enamelling, building and agricultural products, even cosmetics, are made with the same types of materials suspended in water. And all kinds of proven biocides are available for them and these serve nicely in glazes. But it can be difficult to find and choose one. Getting biocides approved in a country is a daunting task that only larger multinational companies can navigate, and the difference in regulatory environments means they may have to produce many variations of a product. This means that, even if you find a product from DuPont or Zschimmer that looks great, it is possible it is not approved for use in your country. Thus is it best to google chemical distributors in your area to see what anti-microbials they import and distribute. If a biocide is good for aqueous slurries, paints, adhesives or latex it should be good for glazes (in the proportion they recommend).

Ceramic supply stores for potters and hobby do not generally carry biocides. And issues with spoiled glazes are rare enough that potters can live without them by simply avoiding bio-contamination when mixing and using them and avoid storing them in overly warm places or in bright light. But, as an insurance, you may wish to add a few drops of Detol or bleach in newly mixed glazes.

Is your contaminated glaze hazardous to handle? Likely not, but to be sure would be as difficult to establish as determining what biocide and how much is needed to fix it. The best course is to throw it out. That being said, it might be possible dry it out to a powder, sterilize the powder and then remix it. If you want to waste time!

Micro-organisms do not just grow in glazes, over time mold can grow on pugged clay (stored in plastic bags). The amount and type of growth depends on temperature and available light, time and type of clay. The process is expected and natural. It might seem logical that porcelains, being made from higher purity materials and having a denser matrix and lacking larger particles, would grow less mold. But such is not the case. Often, the surface mold grows in small spots of intense color, dark enough that potters can mistake it for iron impurities. Patching patterns of discoloration (a slightly different shade of the clay itself) can penetrate into the clay from the surface. Inside the clay slug itself, aging can amplify the spiral pattern created by the pugmill, even creating zones of stiffer and softer clay, These are all manifestations of the aging process and seldom manifest an odor, it is thought these even improve the plastic properties. A few moments of wedging will typically bring the material back to its pristine production consistency.

Mold growing an a clay having added xantham gum 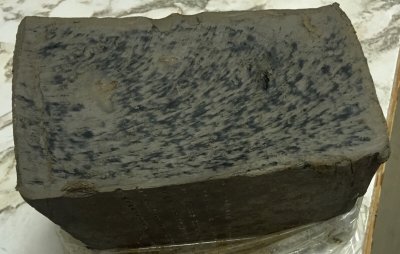 This slug is about 6 months old. It contains 0.75% gum. The gum also destroys the workability of the clay. 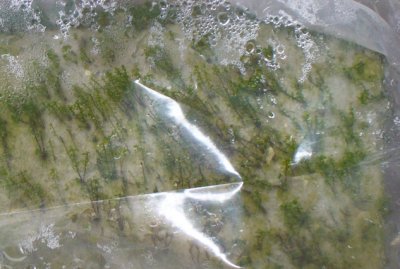 After 10 months of storage (where there is sunlight). 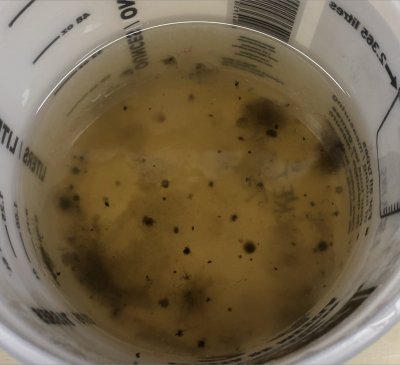 That is why glazes containing CMC often need a biocide if they are going to be stored for extended periods. We made this one. The gallon jar of Laguna gum solution sitting next to this did not go bad, that means they have added some sort of anti-microbial agent.

Mold that has grown on pugged clay in a bag 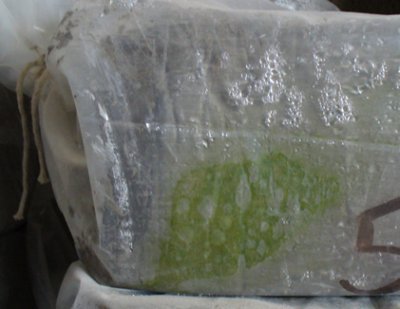 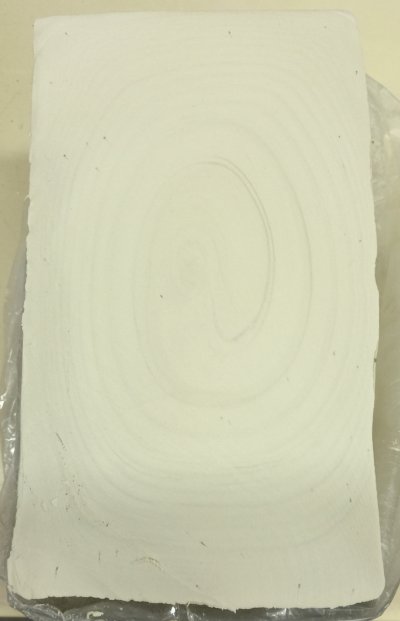 This is a slug of Grolleg porcelain that is about 1 year old. When pugged it was perfect homogeneous white. These streaks and specks have all developed over time as it ages. A slice of this cross section fires pure white.

Aged commercial clay really needs to be wedged before use 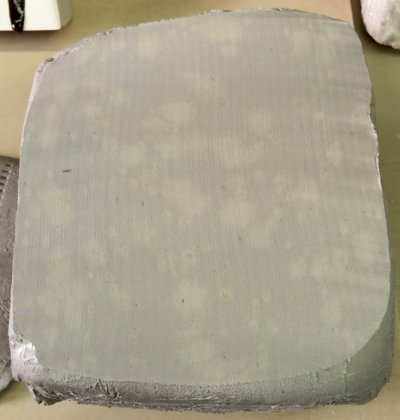 This is a cut through an eight-month-old slug of pugged clay. The cut was done near the surface. The patchy coloration is a by-product of the aging process. If a slice of this was fired in a kiln, an even and homogeneous white surface would emerge, with no hint of what you see here. A few moments of wedging will mix the matrix and ready it for wheel throwing or hand forming.

Another reason why clay should be wedged or kneaded

Left: A high-contrast photo of a cut across the cross section of an eight-month-old slug of Plainsman M370 pugged clay. Right: A cut of a just-produced material (which will exhibit the same pattern in eight more months). You can feel different stiffnesses as you drag your finger across this clay, these are a product of the aging process combined with the natural lamination that a pugmill produces. Clearly, the older material needs to be wedged before use in hand building or on the wheel.

Clay is Plainsman M370. This is part of the aging process and can appear on any clay, depending on the conditions of storage (especially if stored in a very warm place or one exposed to sunlight). On the right this material has been fired to cone 6. The spots, although dark in the wet state, are burned away during firing. Mixing these specks back into the interior of the slug can be done quickly by wedging (diminishing worries about any allergy issues).

A bucket of glaze smells totally rank! What to do? 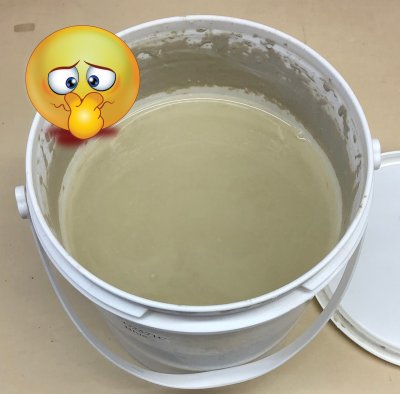 In some places and climates this is more of a problem than in others. It is often not something that can just be ignored because the rheology of the slurry will likely be affected. Is there a magic chemical one can dump in to fix it? Not really. The subject of micro organisms in glaze slurries can be as complicated as you want to make it. This is because there are just so many different things that could be causing the stink. And there is no one chemical that treats them all. Even if there was, it's use would be focussed on prevention rather than fixing a problem. And, it would being its own issues, hazards and specific procedures. There are some simple things to know about dealing with micro organisms in glazes that should enable to you keep relatively free of this issue.