In ceramics, this is the period in the kiln firing where the final mechanical water is being removed. The temperature at which this can be done is higher than you might think.

Refers to the period in a kiln firing where the last of the mechanical water in body (and glaze if on second firing) are being released. Firing can normally proceed quickly after this water has been ejected (750C/hour or more is common in industry but potters would typically proceed at half of that). Typically firings are taken to the boiling point (or somewhat beyond that) and held there for the amount of time necessary to remove all the water (the "water smoking soak"). The degree to which the drying process has removed water determines not only the soak time needed, but also the temperature at which the water smoking soak can be conducted (heavy pieces do require more caution).

Contrary to what you might assume, for well dried ware (in industry) this smoking is effectively conducted beginning at 140C (284F) and proceeding gradually to 260C (500F). However potters, being more conservative, might smoke at 250F (120C). Amazingly, thin-walled ware of even cross section and a high percentage of exposed surface area, can be put into a 250F kiln and it will not explode or even crack as it quick-dries.

Put almost-dry ware into a kiln. This happens! 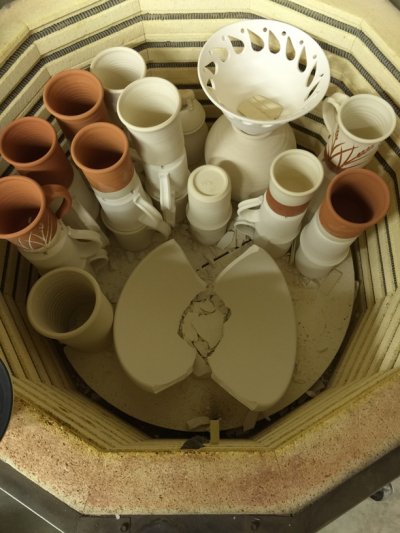 An example of what can happen if ware is heated too fast during early stages of firing. This bowl was not quite dry on the base, it is Plainsman M370. Even though the firing proceeded to 220 degrees and soaked for an hour, it was not enough time for the water to escape before the second step in the firing schedule.

Will leather-hard ware explode or crack of you put it into a kiln at 250F? 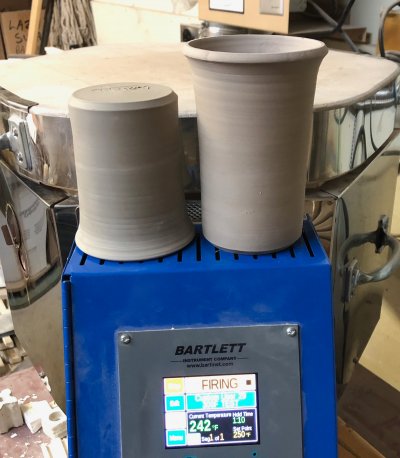 Not if it is thin walled and a high percentage of surface area is evenly exposed to the heat. These pieces are made from 65% ball clay and 35% feldspar, that is not a body one would expect to be able to handle at 15-minute drying, yet it does. The one on the right is completely dry, the one of the left is partly dry (and steaming). They were put into the kiln upside down, exposing all surfaces evenly.