A formula ratio used to evaluate and predict firing properties in ceramic glazes.

The ratio of silicon dioxide to alumina oxide (SiO2:Al2O3 ratio) is often used as an indicator of glaze matteness. A glaze with high alumina thus has a low silica:alumina ratio. This ratio has some value because alumina stiffens the glaze melt (stiffer melts do not smooth out as well on cooling thus creating a fired surface that scatters light). There are obvious limitations to using this indicator since there are other mechanisms and influencers of glaze matteness (e.g. crystallization, firing temperature). Generally, the mechanism of matteness is never purely the alumina:silica ratio. The presence of boron can gloss even a high alumina mix. Of course firing temperature affects gloss (a glossy glaze will be matte if under fired). Firing range is another variable: at low temperatures high temperature fluxing oxides (e.g. CaO, MgO) turn into matting agents (via melt stiffening). In addition, the presence of zinc can cause crystallization and matteness in an otherwise glossy glaze that even has a very high ratio. CaO in large amounts is a matting agent in high and medium temperature glazes (via crystallization). Opacifers will affect matteness.

If you are aware of all the mechanisms and interactions present, there are many cases where you can make use of the SiO2:Al2O3 ratio to some degree to control matteness by adjusting the ratio. The G1214Z recipe is a good example of this. If a glaze is already glossy and the SiO2:Al2O3 ratio is quite low and it is melting well this likely indicates that the glaze has the capacity to accept much more silica to raise, not only the ratio, but improve many other fired properties at the same time (see the example photo linked to this topic). 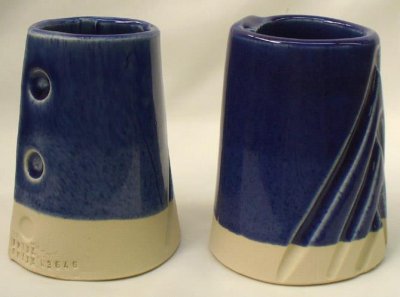