For making typical functional pottery, forget about 3D printing the clay itself. But a standard 3D printer, that uses PLA filament, can be incredibly useful, especially if you are more craft and production oriented. You can design and print mock-ups, molds, stencils and stamps and embossers and templates and cutters, tools, forms, mold pour-spouts, supports and holders, rollers and texture makers, and more. Being able to make so many kinds of things opens up ceramic processes that may not have been practical before. Learning how to use a printer like this will transform the way you think in 3D, it will foster better planning and more careful design.

I only deal with FFF printers (fused filament fabrication) at this time, those that print by extruding a tiny stream of melted material, adding layer after layer to produce an object.

Your printer is just the last step. Before you can use it you need to learn to use 3D designer software and a 3D slicer.

The controller board on a common RepRap 3D printer 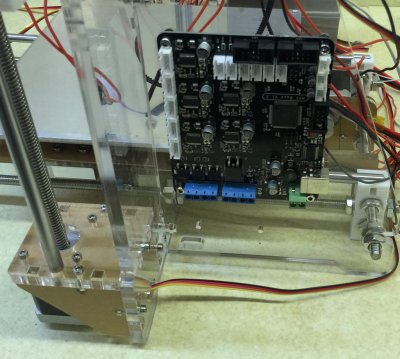 This board is an "Arduino computer", a standard device around which a worldwide community of gadget-building enthusiasts has grown. It has also become standard on RepRap printers. This version has many connectors, they connect to stepper-motors (that control the X, Y, Z axis and the feeding of the filament through the printhead), to switches and sensors for the heating element and fans on the printhead and to sensors and switches for the heated bed. This board runs open source software that can read a g-code file (which defines the movements of the print head for each layer). It uses the Z-motor to move up for each new layer, the X and Y motors to control head movement for the layer and the filament-feed motor to control the extrusion. 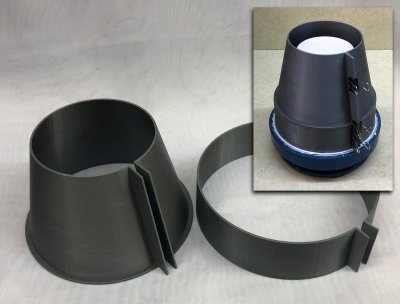 This jigger mold shell has a step that provides the ideal place to split it into two pieces for printing. It is not necessary to do it in your 3D design app, 3D slicer software has the ability to do just before printing. In Simplify3D you just push the object downward on the platform (anything below does not print). Prusa Slicer (and Slic3r) offer a cutting plane to cut an object in two (after printing the first piece you just undo to restore the removed half and then delete the first section and print the second). Then, after printing, just glue the two pieces together.

The controller on a RepRap 3D printer 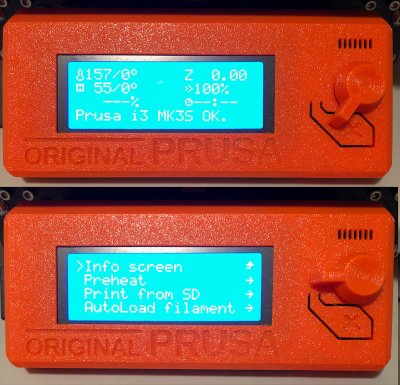 Expensive and cheap RepRap printers have the same type of control panel. The info-screen displays on startup and during print jobs, it shows the temperature of the nozzle and the bed and percentage completion. Pressing the dial-button brings up the menu, you move the selector by turning the dial and select a choice by pressing it again. An SD-Card inserts on the side (that is where you write G-Code files produced by your slicer software). Then, using the "Print From SD" menu choice (bottom panel), you choose the desired file and click the button to begin. That initiates the head and bed heat-up sequences and the print starts when that is done. This control panel is also needed to load and unload filament, calibrate the height of the bed, settings, etc.

A good quality 3D printer is worth the extra cost 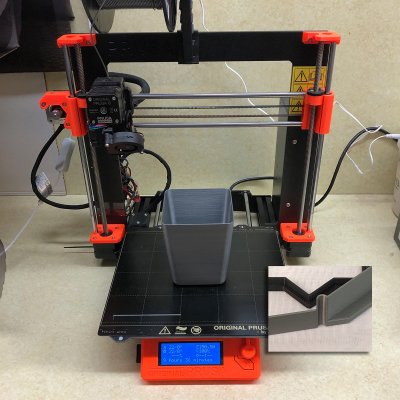 Czech inventor, Josef Prusa, takes great pains to preface the name of each model with the word "Original" (e.g this is an "Original i3 MK3S"). Dozens of Chinese companies have copied his i3 machines and sell them for 1/3 to 1/2 the price. But buyers must deal with no support, disconnects between absurdly poor instruction manuals and parts, poor quality parts, parts that do not fit or work, no wonder that a large percentage are never able to complete the assembly. This printer, by contrast, has a LEGO-quality instruction manual and lots of online support. It also has auto bed levelling (this is a huge factor), much better cable routing, automatic filament insert, removable flexible bed, has its own slicing software, it prints faster, is quieter, does not break down all the time and print quality is much better (note the closeup: less than 1mm thickness, yet highly precise). You can even pull the plug out of the wall during a print and it will continue after reconnect! And its updates its software through the slicer software (super important to new).

The rear of a partially assembled RepRap 3D printer 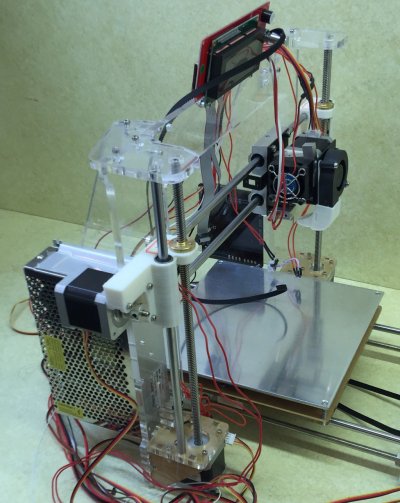 In this printer (which is being assembled) the printhead moves along two stainless steel rods (for the x-axis). Its position is controlled by the front top stepper motor (which has a gear through which runs a rubber belt attached to the printhead. The two lower stepper motors with worm gears attached to their shafts control the vertical z-axis position of the printhead assembly. Since the computer controls these motors it can move the head to any position on the x or z axis. Vertical z-movement is slower and more precise since it determines the thickness of each slice to be printed.

The printhead of a make-it-yourself RepRap 3D printer 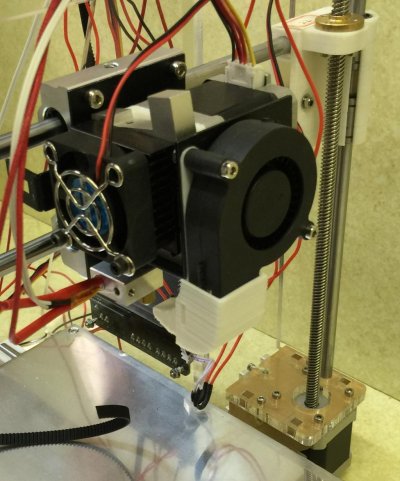 The assembly has a powerful electric stepper-motor with attached to a gear assembly that pulls the filament in through a hole in the top. It forces the filament down through a heated nozzle. PLA is a common filament type, it requires the nozzle be at 215C to extrude well. The brass nozzle puts out a 0.45mm wide extrusion (it is mounted to the bottom of a small aluminum block at the bottom). The nozzle has a heat sensor and its own cooling fan (enabling the controller to precisely maintain nozzle temperature). An additional fan and heatsink (on the left side) keep the motor and filament feed area cool. The entire head assembly is pulled left and right along stainless steel rods by a gear-belt controlled by the X-axis motor. Inserting filament can be tricky in machines like this. The best strategy is pre-heating the nozzle, pressing release level (to enable free filament movement) and then pushing the filament to feed it manually through the nozzle, then pulling it out suddenly. To reload, cut it to a point (using scissors), configure the printer to preheat the nozzle to 215C, then feed it down through until it extrudes.

The movable printing bed on a common 3D RepRap printer 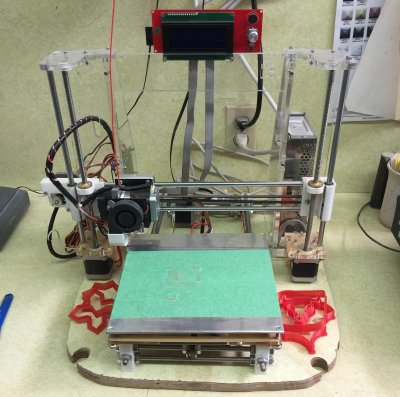 These build-it-yourself kits are good to learn how the printers work (but don't get one until you have seen the instruction manual). The printhead slides (on bushings) along two horizontal stainless rods - the gear-belt, driven by a stepper motor on the far left, controls its left-right position along the X-Axis. Two motors on the lower left and right turn vertical worm-gears that move the printing mechanism up and down (along the Z-axis). Like the print-head, the printing bed (or platform) is pulled forward and backward by a rubber gear-belt driven by the Y-Axis stepper motor (at the lower back). The bed is heated, maintaining a temperature of about 50C, this keeps the printed piece from warping and loosening during printing. On cheaper printers like this it is common to put masking tape on the bed, pieces stick to it better. Calibrating the height of the bed is tedious on these.

Precision of a better 3D printer on thin walls 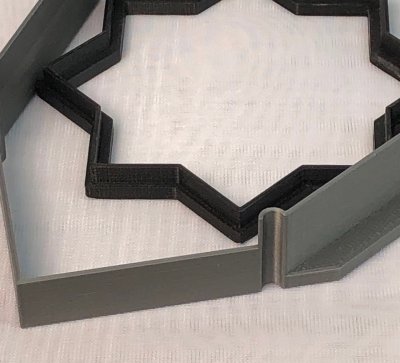 The grey cutter was done on a better printer (my Prusa i3 MK3), the other on a Chinese machine I got on Ebay. Not only are the edges crisper but the vertical walls are not splitting down the center into two layers. The splitting happens because I use 0.9mm thickness for the walls (the extruder puts down a 0.45mm wide path so I get a quicker two-pass print). I print these same types of pieces on both printers using multiple filaments and the same slicer software. The better printer always produces better results.