In ceramics some clays of are of such exceedingly small particle sizes that they can stay in suspension in water indefinitely. But unlike common colloids, clays have a secret weapon.

Colloidal particles are so small and light that they do not settle in water. Milk is colloidal. In true colloidal suspensions the movement of water molecules is enough to keep them from settling. Bentonite contains colloidal particles, but it also contains larger ones which also stay in suspension. Why? Because clay particles are flat and they are electrolytically charged (having opposite charges on the faces and edges). This phenomenon encourages a house-of-cards orientation in the water. Because of this, clay particles that are larger-than-colloidal can behave in a colloidal way. This phenomenon is so effective that the system can be loaded with a majority of non-colloidal, non charged particles within the structure and they can also be held in suspension. In the case of ceramic glazes, electrolytes can be added to the system to enhance this phenomena.

Materials can be ground to nano-sized colloidal particles in a ball mill, for example, and exhibit colloidal behavior purely as a product of their size. A liquid can be tested to demonstrate if it is a solution or colloidal by shining a beam of light through it. Its degree of visibility is an indicator (although low specific gravity colloids can be fairly clear). 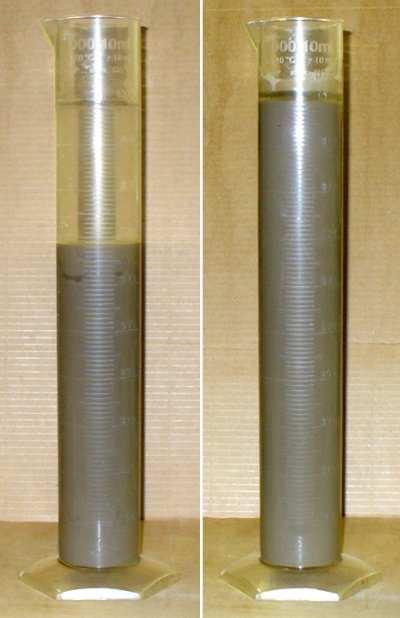 How fast will a fine particled bentonite settle in water?

This is VeeGum T, a processed Hectorite clay (similar to bentonite, extremely small particle size). I have propeller-mixed enough powder into water that it has begun to gel. How long does it take for them to begin to settle? Never. This sat for a month with no visible change! That means it is colloidal.