EPK is considered by many to be the best North American kaolin for use in suspending glazes as it tends to produce a smooth thixotropic slurry. 15-20% will normally make the glaze gel slightly, thus when a piece is immersed in the slurry and removed it drips very little and the wet glaze layer stays in place for the time it takes to dewater. Since EPK is very close to theoretical kaolin chemistry, it will substitute for any other pure kaolins (e.g. Pioneer). Conversely, most other kaolins will not change the fired properties of most glazes that specify EPK. If other kaolins do not suspend the slurry well enough, just gel it to make it thixotropic (see link below).

EPK is and whiter than other American kaolins, this is due to its relatively low iron content, but more importantly the low level of TiO2. Its 0.4 TiO2 is high compared to Grolleg and Super Standard Porcelain kaolins (about 0.05%), but other common American kaolins have four or five times as much TiO2!

EPK has excellent casting properties. But it is not plastic enough for throwing bodies, it must be augmented by a more plastic kaolin (like 6Tile) or by a plasticizer like bentonite or hectorite. Or, if whiteness can be sacrificed, by a ball clay.

This material is mined and processed in Edgar Florida. It is extracted hydraulically (a high pressure stream of water is used to wash the clay/sand mix from the bank into a small lake). The slurry is pumped from the bottom and transported to vibrating screens that separate out the sand and grade it into sizes. The clay that passes the screens is pumped into a pond and settled with the aid of a flocculant. The slurry is then dried and the flocculant neutralized. The main product at this mine is high quality white sand, the clay is a byproduct. The company is confident that there are reserves for the next hundred years or more and the quality will be constant throughout the life cycle of the deposit.

A 70:30 mix of EPK:Nepheline Syenite has gone to mush 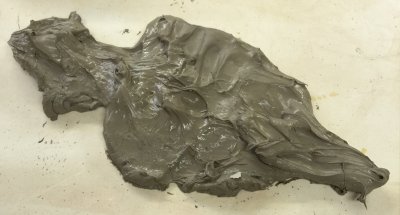 This was plastic and moldable two days ago, now it is incredibly sticky. It is being compared with 5 other kaolin:nepheline mixes, none of them have reacted in this way.

From these (SHAB test bars) EP kaolin appears to have a much higher fired shrinkage. But half of that happened during drying. Still, EPK shrinks 4% more during firing. Yet Grolleg produces more vitrified porcelains. The EPK bar also appears be whiter. Yet in a porcelain body Grolleg fires much whiter. That higher drying shrinkage proves that EPK is much more plastic, right? Not really. Throwing porcelains containing either require plasticity augmentation using similar percentages of bentonite. What do we learn? To compare materials like this we need to see them "playing on the team", in a recipe working with other materials. Don't rely on material data sheets, do the testing.

Thrown pieces made from pure Grolleg and EP Kaolin 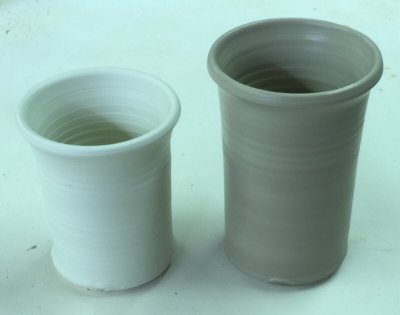 These have just been thrown on the wheel. They were slurried and dewatered to about the same water content and the same amount was thrown on a potters wheel to compare the plasticity. While the Grolleg is stickier and dewaters a little slower, it is not nearly as plastic. Curiously, New Zealand Halloysite is quite a bit less plastic than the Grolleg but it responds to plasticity augmentation (in porcelain recipes) just as well as Grolleg (similar amounts of bentonite producing similar plasticities). And, bodies containing EPK need about the same amount of bentonite to produce plasticity suitable for throwing large forms. So, the plasticity a porcelain appears to have by itself is not completely indicative of what it will contribute to a body.

Two kaolins, one cracks on bisque, the other does not 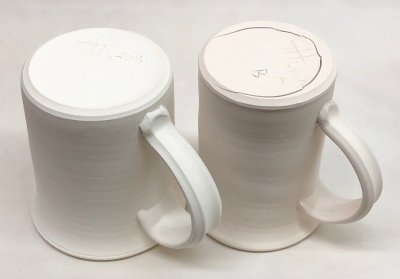 Both of these are mixed 70:30 kaolin:feldspar. Left is a fine particled kaolin, #6 Tile. Right a coarser particled, less plastic material, EPK. During forming, the larger particles line up concentric to the center better. This causes the body to shrink more along radius lines than along tangent, producing these cracks. Many of these were made and they all cracking like this.

Two batches of EPK tested quite differently in 2018 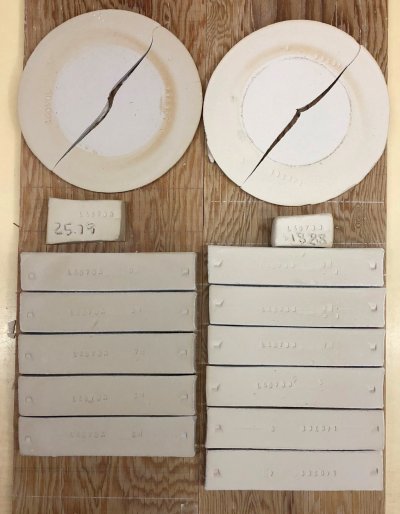 The EP kaolin has been mixed 70:30 with nepheline syenite. This creates a body that matures below cone 6. And it enables comparing the degree to which the two kaolins influence vitrification (and their contribution to fired color in a vitreous body). The darker one is more plastic, has higher drying shrinkage more soluble salts. These dry test bars were fired at cone 4-8 and had similar fired shrinkages and porosities. However the one on the right fired whiter at all temperatures. These differences would impact the plasticity and drying shrinkage of bodies containing a significant percentage of the material. They would also influence the ability of this kaolin to suspend slurries.