A downloadable program for Windows, Mac, Linux for doing classic ceramic glaze chemistry. It has been used around the world since the early 1980s.

A ceramic glaze chemistry desktop application for Windows, Linux, Macintosh. It shows side-by-side recipes and their formulas. It is interactive in the sense that the chemistry impacts of changes to a recipe are immediately displayed and the process of formula-to-batch is automated. It stores recipe and material data (up to 200 materials) locally and does not communicate with any server or peer online.

Insight was first released in 1979 and has run on many operating systems since that time. As of 2021 it works on Mac, Windows and Linux. Insight is a classic glaze chemistry calculator. Its release marked the first time that people everywhere could easily do glaze chemistry, grow their understanding of glaze and learn how to solve problems like crazing, shivering, blistering, leaching, cutlery marking, etc.

From the beginning, it was designed to be able to see the recipes and chemistries of two glazes, side-by-side. This was accomplished by an in-memory materials database. Insight name-matched materials in recipes with those in the database to be able to compile the combined chemistry. Before graphical operating systems it used the box-drawing characters of the OS to create separate recipe and formula frames. Before menu-driven systems it used keyboard short-cuts to navigate through the horizontal menus at the bottom of the screen. During the early 1980s Insight migrated to color displays. Around 1990 it moved to graphical operating systems. During the 1990s, as systems became more powerful, it was able to do calculations live (the calculate-menu-choice was no longer needed). From the beginning it stored recipes in separate files on the disk (first in simple text format, then in XML). Around 2000 it moved to storing all data in an SQLite single-file database. Materials storage also evolved from text to XML to CSV files, Insight has always loaded the database at startup and maintained it in memory. The CSV format enabled people to manage their materials database outside of Insight using Excel or compatible spreadsheet software.

Early distribution of Insight was done by magazine advertising and mailing of diskettes and manuals. During the late 1980s this migrated to a BBS system that enabled customers to dial-in and search reference material. In 1995 distribution moved online and the reference materials grew to what is now digitalfire.com.

This was on the IBM-PC, it was introduced in 1982. Until then Insight was running on Tandy Model 1 and 3 computers. The program was shipped on floppy disks. I was lightning fast, recalculating the chemistry as fast as you could push the calculate key. It could handle as many recipes as you had disk space for and knew about 100 materials and their chemistry. However only one recipe could be displayed at a time. Many of our customers stuck with the old DOS version of Insight well into the 2000s, even though the Windows version had long been available. 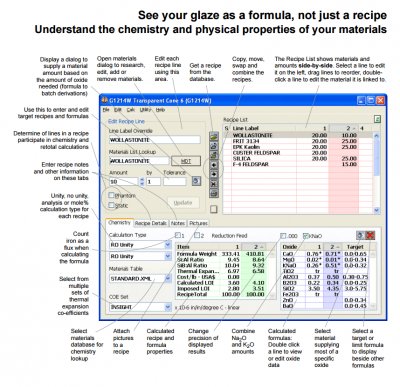 Insight installs on your Linux, Windows or Mac computer. It provides a very interactive way to comparing two recipes and their calculated formulas or analyses. As you make changes in the recipe you can see how it impacts the recipes. It is ideal for demonstrating concepts like unity, analysis,
formula, mole%, LOI, formula-to-batch conversion. 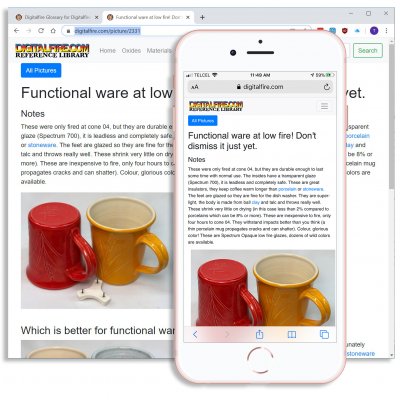 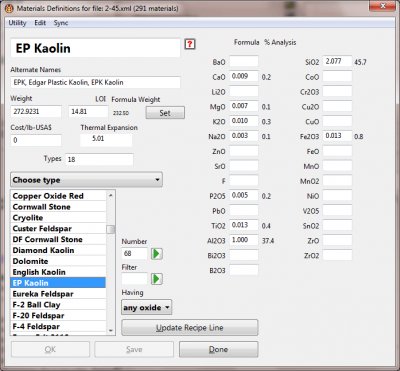 Desktop Insight remembers materials (in its database) as formulas and their formula weights. From this it can calculate the LOI. Materials can have alternate names so they are more likely to be found in calculating recipes. This dialog provides tools for adding, editing, deleting, importing and exporting materials. 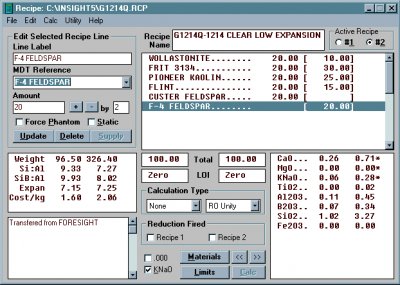 This was the Insight jump from the old DOS version to a modern graphical user interface. Although Insight was available in Window 3.1, Windows 95 was the first version that was good enough that people left DOS behind. 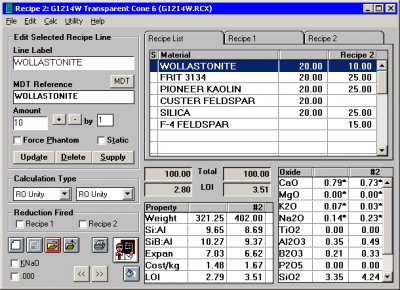 It is not really that dissimilar to Insight as it is today. It packed alot of power but people of the time were not inclined to believe that it was possible to do the chemistry that easily, or even that the chemistry was worthwhile learning. 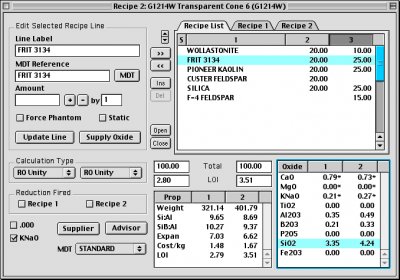 The Macintosh version used the same file formats as the Windows version right from the start. Macintosh customers however, were more likely to think that the program should think for them and more likely not to know which way to put the floppy disk in! 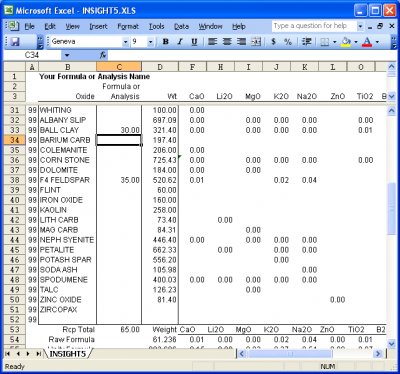 From the 1980s to 2000s we made this spreadsheet available. It stored materials and did the calculations in the same way that Insight did. We used it to verify that calculations were being done correctly and many customers downloaded it to learn more about the theory.

We already had a large library of educational material (the predecessor of the Digitalfire Reference Library). The Foresight product was the fore-runner to insight-live.com today. And it was free like today. And we were warning people about the importance of safe glazes and understanding the "why" questions about the ceramic process.

Another reason that Insight-live.com exists 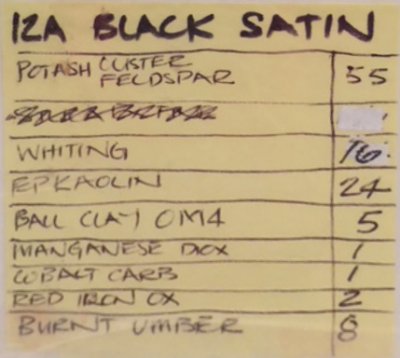 First, I need to record this as a recipe in my account at insight-live.com so it can be printed at any total, documented with pictures of it on different clays, firing schedules and how they affect it, general notes. And be accessible from anywhere with any device. Then I need to start working on improving it. With all that feldspar it is sure to craze, I need to reduce it and substitute the some of K2O it contributes for MgO (from talc). With all that clay (29 total) it is sure to crack while drying, I need to split it into part calcined kaolin and part kaolin (the ball clay is not needed). And those raw colorants: Better to use a black stain. At a minimum it is better to use cobalt oxide than carbonate. The burnt umber could likely be increased to eliminate the need for both the manganese and iron (since it supplies both and has zero LOI).