Metallic glazes can most easily be produced in oxidation by mixing a very high percentage of manganese dioxide with a low melting frit. The metallic visual effect is modified by the degree of melting of the glaze, the saturation of metallic oxides in the recipe and the amount of crystallization that occurs during cooling in the kiln. Manganese is an active melter, so 50% of it and a borax frit will produce a very fluid glaze (glassy, iridescent) at cone 6. Other metal oxides like copper and cobalt are also active fluxes and melt even better than manganese, but they are prone to forming crystals during cooling (the micro-crystals of copper completely matte the surface). It can thus be beneficial to incorporate some copper or cobalt with the manganese in the recipe to promote the desired amount of crystallization. The proportion of frit to color can be varied to produce a wide range of metallic surfaces. The amount of crystallization that occurs can also be controlled by choosing frits with varying levels of Al2O3 (higher levels will impede crystal growth). Their development can also be encouraged by adding a catalyst (e.g. barium carbonate)

Some recipes employ up to 90% metallic oxides/carbonates and 10% frit, these of course do not melt nearly as much (producing a more bronze-like effect).

In reduction firing it is easier to produce metallic surfaces, thus much lower amounts are needed. A key reason for this is that iron, while refractory in oxidation, is an active flux in reduction. In addition, iron oxide is inexpensive whereas the other metal oxides useful for this purpose are very, very expensive. Bronze-like surfaces can also be made by the addition of rutile (it contains high concentrations of metals and crystallizes to produce metallic appearances).

There is very important caution regarding the use of these recipes: Manganese fumes (produced during firing) are toxic, you must have a kiln venting system that works properly. They are completely unsuitable for use on functional surfaces as they are highly likely to leach heavy metals. 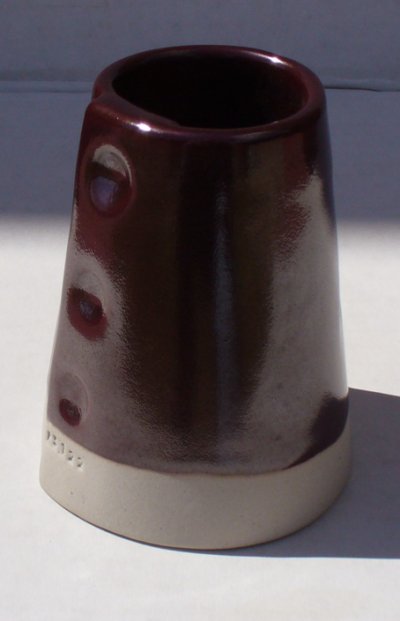 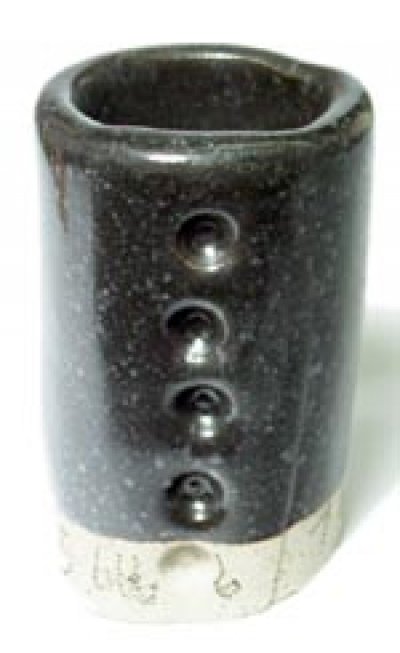 Iron oxide is an amazing glaze addition in reduction. Here, I have added it to the G1947U transparent base. It produces green celadons at low percentages. Still transparent where thin, 5% is producing an amber glass (and the iron is showing its fluxing power). 7% brings opacity and tiny crystals are developing. By 9% color is black where thick, at 11% where thin or thick - this is “tenmoku territory”. 13% has moved it to an iron crystal (what some would call Tenmoku Gold), 17% is almost metallic. Past that, iron crystals are growing atop others. These samples were cooled naturally in a large reduction kiln, the crystallization mechanism would be much heavier if it were cooled more slowly.