Every gas kiln is different so this schedule may not work for you if you kiln does not cool at the same rather or maintain the same atmosphere. Our kiln is brick construction, downdraft, four natural gas burners, about 30 cubic feet. It fires evenly top-to-bottom and front-to-back. We have had and used others but none of them equaled the quality of firing this can produce. It was built by Luke Lindoe.

It can rise while reducing so we do not do a separate body and glaze reduction (with an oxidation climb between). Reduction is consistent throughout the kiln, enough to produce a clear bluish flame at the peepholes (with some yellow at the damper). We soak for half an hour in oxidation at the end. To prevent temperature rise during this phase we turn the gas pressure to almost zero (allowing it to drop a little). On shutdown we seal it up but temperature still free falls (although slower than a fibre kiln would). We open it at about 200F two days later.

Gas kiln near cone 10R in the Plainsman Clays studio 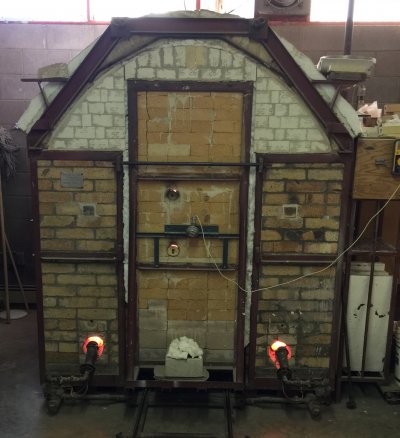 It is old, but nothing we have ever used fires as evenly and reliably as this downdraft kiln. It was built by Luke Lindoe in the 1960s. I have used it through my entire life as a potter since the early 1970s. Two burners at 2 inches oil-column will take it to 1000F fairly quickly, but it takes 4 burners at 4 inches and 20 hours to get it to cone 10. I can judge the back pressure and degree of reduction by the length and color of the flames at the peepholes and color of the flame passing the damper at the back. Changing the damper position by an eighth of an inch during reduction is enough to discern a change in the flame. 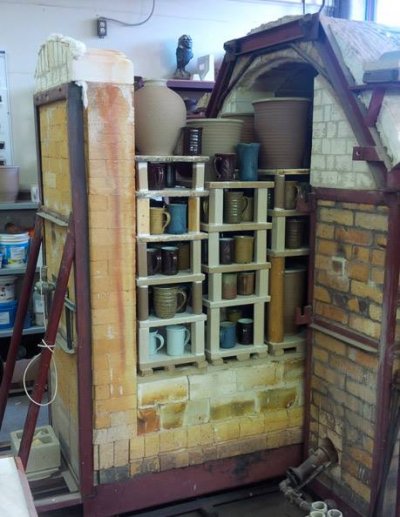 It fires evenly in temperature and atmosphere from top to bottom, front to back. Nothing more can be expected for any studio kiln. We use the C10RPL firing schedule.

Another view of the gas kiln in the Plainsman clay studio 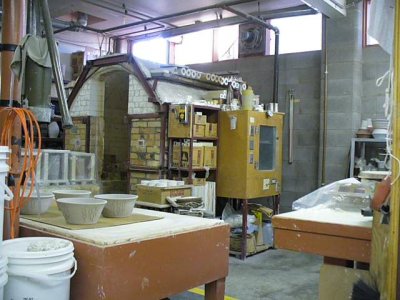 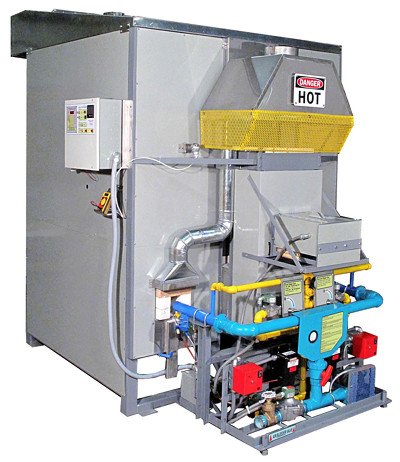