TiO2 occurs in many silicates in nature, accounting for over 1% of the earth's crust. Thus it is manufactured using a variety of materials and processes. Titanium dioxide power is very fine-grained and it agglomerates, so glazes containing it need to be sieved to break down the small lumps (even a high speed propeller mixer often won't do it).

Although titanium is the strongest white pigment known for many uses, in ceramics the whiteness (and opacity) it imparts to glazes is due to its tendency to crystallize during cooling. While titanium dioxide is used in glazes as an opacifier, it is not as effective and easy-to-use as tin oxide or zircon. It can be used as an additive to enliven (variegate, crystallize) the color and texture of glazes by introducing crystallization. Rutile works in a similar manner, typically both become saturated in the melt beyond about 5-6%, producing a dry and unstable glaze surface. In moderate amounts it encourages strong melts, durable surfaces and rich visual textures.

Titanium is available both as raw and surface treated products. Non-pigmentary grades flow more freely in the dry state. Self opacified enamels are made by adding titanium during smelting to super saturation. Upon firing the enamel, the titanium crystallizes or precipitates to produce the opacity. Titania is also used in dry process enameling on cast iron appliances for its effect on acid resistance, color and texture. In glass, non-pigmentary titanium dioxide increases refractive index, intensifies color.

The titanium/stain mechanism at cone 10R 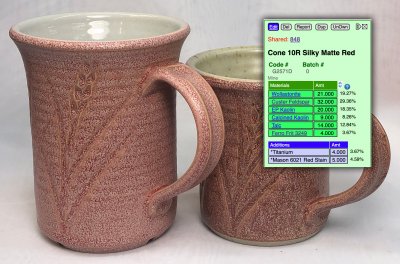 These are porcelain and stoneware mugs. The glaze is G2571D (based on the fritted G2571B version of G2571A). This project started with calculations to source boron from a frit (instead of Gerstley Borate), MgO from talc and a frit (instead of dolomite). These moves enabled eliminating raw silica from the recipe. This produced a finer silky texture and better melt fluidity (for hosting colors). Adding rutile and zircopax produced a great bamboo. But what about variegating using titanium instead of rutile (it contains no iron so colors should be brighter)? Look what happens with this red stain! The titanium has done it's job even a little too well (creating a slightly more abrasive surface). Cobalt and titanium also worked. Imagine if other stains would produce dramatic results like this, each with the amount of titanium tuned to it!

A hazard of using titanium opacifier in a glaze 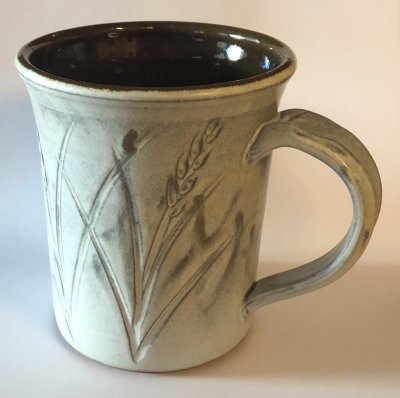 The rustic and variegated effect have been achieved. However, notice that the drips from drainage during glazing are visible. This is because this type of variegation is produced by variations in the glaze thickness. These can be intended, like the thinning that occurs on the edge of contours, but also unintended (like drips and runs). 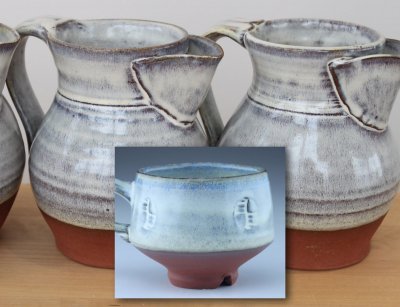 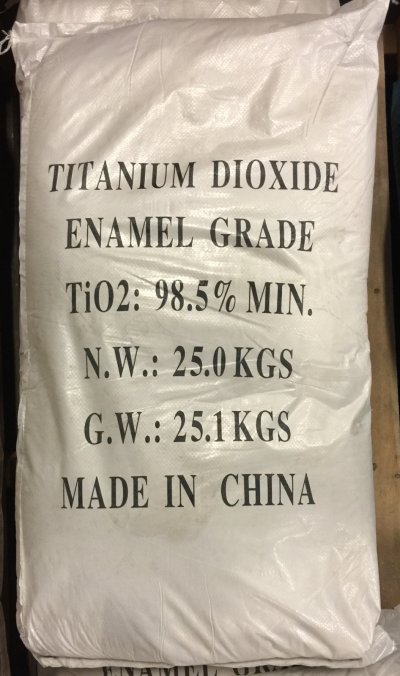