A Low Cost Tester of Glaze Melt Fluidity
A One-speed Lab or Studio Slurry Mixer
A Textbook Cone 6 Matte Glaze With Problems
Adjusting Glaze Expansion by Calculation to Solve Shivering
Alberta Slip, 20 Years of Substitution for Albany Slip
An Overview of Ceramic Stains
Are You in Control of Your Production Process?
Are Your Glazes Food Safe or are They Leachable?
Attack on Glass: Corrosion Attack Mechanisms
Ball Milling Glazes, Bodies, Engobes
Binders for Ceramic Bodies

Bringing Out the Big Guns in Craze Control: MgO (G1215U)

MgO is the secret weapon of craze control. If your application can tolerate it you can create a cone 6 base glaze of very low thermal expansion that is very resistant to crazing.

Crazing is a universal problem in ceramics and pottery. There are a lot of band-aid solutions out there but the only way you will ever really deal with it is by understanding the simple cause. It is true, there is no universal solution. Nevertheless, in the majority of situations the problem can be completely solved by adjusting the chemistry of the glaze to reduce its thermal expansion without affecting other fired properties.


Let's enumerate some of the changes you can make to a glaze recipe to deal with crazing. Remember, we can predict the effect of a change by calculating the thermal expansion (using a glaze chemistry software program like an account at insight-live.com). For each I will discuss its effectiveness at reducing thermal expansion based on a calculation I have done. Remember that a glaze that displays crazing needs major change, not fine tuning (even glazes with no visible crazing out of the kiln often need major change). I have found that fixing crazing usually requires a 0.5 reduction in the calculated crazing (using insight-live.com). That means if the glaze calculates to 7.0 thermal expansion, then I aim for 6.5.

For these solutions chemistry is needed to juggle the amounts of materials to achieve the desired oxide change.


Although many of the above less dramatic strategies do not have a large individual reducing effect on glaze expansion, in combination it is true that they can add up. I have found that crazing glazes invariably have other deficiencies (e.g. too glossy, too matte, tendency to pinhole or blister, crystallize, cloud up, settle in the bucket, knife mark, dissolve in acids, etc). It is thus best to pick a strategy that reduces crazing and at the same time addresses other problems. For example if the glaze is melting very well and is glossy then it likely will tolerate more silica. Likewise, if the glaze is melting well but is too glossy, you can add alumina, it will help reduce expansion and gloss plus increase hardness. If a glaze is not melting quite well enough then the addition of boron will reduce expansion and melting temperature. If a glaze is settling in the bucket and melts well, it will likely tolerate both alumina and silica additions, that means you can increase kaolin and the glaze will suspend better. All of these will help, but I repeat that a crazing glaze needs major work, even a combination of these will not likely be enough to fix the problem.

Almost all the crazing glazes I can remember had one thing in common: high sodium and potassium (from feldspar, nepheline syenite or frits). When you consider increasing sodium and potassium has up to 10 times the effect on expansion as does reducing silica, it only makes sense that replacing part of their content with a flux of the lowest possible expansion will have the maximum effect. Substituting MgO for KNaO imparts the maximum effect. However you could also substitute KNaO for a mixture of CaO, ZnO, Li2O, SrO also.

There are some possible problem with increasing MgO in glaze recipes. First, MgO can contribute a different color response for some metal oxides. However I have not found this to be a big concern in most cases (except for the important exception of Chrome Tin pink colors, they do not like MgO). As noted, the main raw sources of MgO, talc and dolomite, are viable in high fire glazes but they do not melt well to release their oxides at lower temperatures (in addition both are rather gaseous and can contribute to glaze imperfections at lower temperatures). Frits like Fusion F69 or Ferro 3249 are the perfect solution for middle temperatures like cone 6. They release no gases to bubble, blister or pinhole the glaze like talc and dolomite and they melt much better. If your glaze already contains a material contributing boron (and almost all middle fire glazes do) these frits are ideal candidates to help you reduce thermal expansion dramatically.

Consider glaze G1214W Cone 6 transparent base recipe (others will be discussed in a moment):

This glaze is an adjustment to improve the earlier 20x5 recipe G1214M (to give it better gloss and melting, less boron clouding). However this glaze does tend to craze on clay bodies having a lower quartz content. In addition, its CaO content is lower and so it does not work well with Chrome-Tin colors. The most successful strategy to reduce its thermal expansion was G1215N (before exploring the MgO frits), in it I killed the feldspar and substituted Na2O/K2O with a range of other fluxes (Li2O from Spodumene, ZnO and SrO). This fires to a very nice crystal clear glaze but the glaze slurry is not as nice to use (it foams and bubbles) and still crazes on some bodies.

However the G1215U recipe was better. I was able to use less total frit content and maintain the chemistry of G1214W (other than substituting MgO for KNaO). Notice that the Na2O sourcing feldspar is actually higher (the frit 3134 is very high in Na2O, I eliminated it). Unfortunately, although this is a high calcia glaze, the MgO still prevents it from working with Chrome-Tin pink colors. But the exciting aspect of G1215U is the ease with which I reduced the thermal expansion. Infact, there is lots of room to move it further since there is still plenty of KNaO to remove and many of the other strategies mentioned above are also open. Infact, MgO works so well to reduce thermal expansion that you can actually create a glaze at cone 7 that will not craze on a porcelain having zero silica content! Imagine, a quartz-free working environment.

Although MgO does not melt as well at middle temperature we have found that diversifying the fluxes, adding a little zinc or lithium, and increasing the boron a little will make room for as much MgO as you will need.

The moral of the story is that in serious cases of crazing the magic oxide is MgO, increasing at at the expense of K2O and Na2O will dramatically reduce the expansion. Further, you need to be able to do ceramic calculations to intelligently bring an MgO frit into your glazes without upsetting the fired properties too much.

Can you make G1215U using common frits or raw materials to source MgO?

Not easily. The magic of high magnesia frits is that they melt so much better than raw materials that source it and do it without any gas release. To demonstrate this I mixed G1215W (not the same as G1214W mentioned above), it has the same chemistry using the recipe 33 EPK Kaolin, 32 Silica,  5 Whiting, 24 Frit 3134 and  7 Talc. This does not melt nearly as well and it is full of bubbles.

I have not discussed durability issues here and trust that you can do simple leaching tests. If you find that some colors leach there should be plenty of options to retain the expansion and adapt the chemistry in the direction of more stability.

Cone 6 porcelains are the most prone to crazing because they have lower quartz contents (more flux is needed to mature them). This glaze was originally intended for use on porcelains for this reason. If you use this glaze on stoneware beware of the possibility of shivering and weakening of the ability of the ware to resist cracking against sudden increases in temperature (especially when this glaze is employed on the insides of forms.

Using your account at insight-live.com you can reduce the thermal expansion of this glaze much lower than it already is, even low enough to work on an alumina porcelain. Contact us for more information.

We are altering this recipe a little to reduce the MgO content somewhat and increase the B2O3 a little (the result is G1216L). This is being done to reduce its tendency to move toward a silky magnesia matte at times, a product of the high MgO. We are suspicious of a change in the Frit 3249 as a partial cause. We have also found a way to remove the expensive frit 3249! 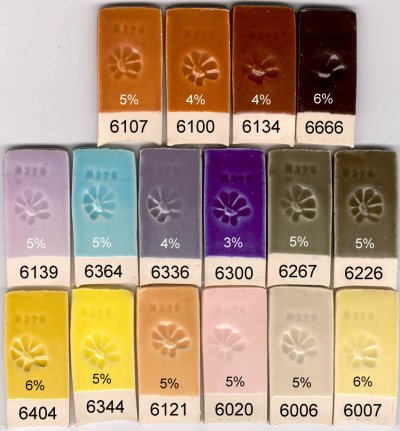 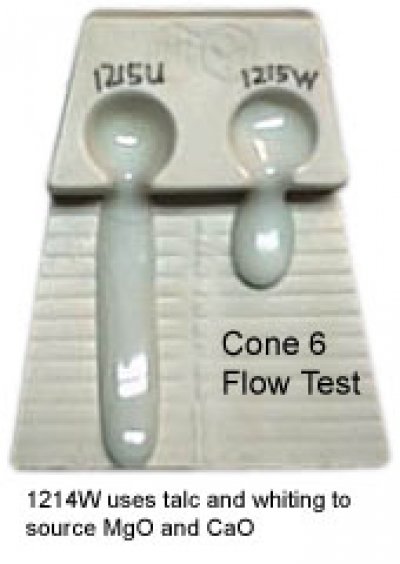 These recipes have the same chemistry but the 1215U uses frit to source the MgO and CaO. This demonstrates that it is not just chemistry that determines melt flow. Raw materials are crystalline and have different melting patterns than frits (which have already been melted and reground).