The Right Chemistry for a Cone 6 MgO Matte

The image (link below) compares the chemistry and recipes of four high-MgO matte glazes. The glaze on the far right is the initiator, the one against which the others are being compared. It is G2928C, a cone 6 Ravenscrag Slip matte (R-Matte) developed from Moore's matte original (has some tin to whiten it). It is conservative (is not as matte as the two others to its left, but it does not cutlery mark). It has a low Si:Al ratio and maximum recommended MgO and quite a bit of KNaO. But I wanted to understand what the implications were of adding and removing SiO2 and Al2O3 in a magnesia matte, how much of a role does the MgO play. Well, it appears MgO is the key, the rest of the recipe can vary quite alot.

3728A is our original dolomite-testing recipe (Dolo-matte). It is 27% dolomite. It takes MgO to 0.4 molar and has very little KNaO. It has a stunning ivory surface, but cutlery marks. It has much lower SiO2 and half the Al2O3 yet does not flow more (because of the greater MgO and less potent CaO-dominant flux mix).

2934 is more matte than R-Matte. It has more MgO and CaO at the expense of KNaO and Si:Al (the Si:Al ratio is the same). Amazingly it is actually flowing better. It does not cutlery-mark. The color is darker than Dolo-matte because it is developing a more complete glass that gives depth.

2934A was done to see if MgO would matte a high silica version. The Al2O3 was dropped way down, the SiO2 taken upward for a ratio more than double R-Matte. You would think it would flow the same because the total Si+Al is actually less. But no. Does Al2O3 have to be high for this to work? No, Dolo-matte has low Al2O3. Is a low ratio needed? No Dolo-matte has a higher ratio that 2934 yet is more matte. Is significant KNaO needed? No, Dolo-matte and 2934 have very low KNaO.

So I think I know: You need lots of MgO, that is the magic. High or low Al2O3, but there is a SiO2 sweet-spot where a non-markable glass develops. You don't need a lot of boron, this only has 0.1 (some cone 6 glazes have 5 times that). I am going to put a little tin in 2934 and raise (yes, I said raise) the silica a little for just slightly more matte. 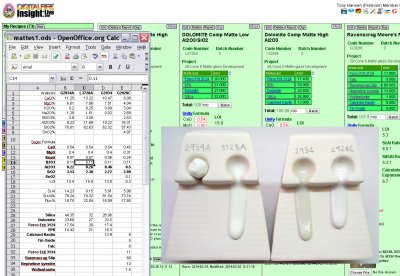 An Insight-live page displaying four cone 6 matte recipes. It has been exported to a CSV file which I have opened in my spreadsheet software. I then reorganized it to compare these 4 glazes and relate the chemistry to the melt flow tests.