Alberta Slip, like the original Albany Slip, melts to a beautiful glossy deep brown at cone 10R. Use as a pure glaze, it stops just short of being Tenmoku at cone 10R (a 1% iron addition is needed). Unlike many Tenmokus, it is not too fluid.

The color of this glaze varies considerably with thickness. Its thermal expansion is low enough that it does not easily craze on stonewares or porcelains.

Like Albany, Alberta Slip is a clay. It shrinks during drying, more than Albany did. Using pure Albany as a glaze required calcining part of the mix (to prevent cracking during drying). Alberta Slip is the same, however it requires a higher calcine-to-raw proportion. While calcining is an extra step, the capacity to change the calcine:raw proportion gives you control over the properties of the slurry. Ideally it needs to be plastic enough to suspend well and harden on the ware, but not so plastic that it shrinks too much during drying. For calcining instructions please visit http://albertalslip.com.

This glaze is most often prepared using the traditional method of simply adding water until the desired consistency is achieved (do the initial mix with 8 parts water and 10 powder). No flocculant additions are generally needed and application properties are very good as long as the slurry is not too viscous or too runny (dries quickly without cracking and, after dipping, there is minimal dripping). A weight ratio of 90 of our tap water and 100 powder produces 1.435 specific gravity. A 1-2 second dip in 1850F bisque-ware produces the right thickness and there is minimal dripping, even coverage and quick drying. Be careful that it does not go on too thick or cracks on drying, if needed dip quicker, add a little more water or bisque higher. Alberta Slip does not respond to Epsom salts as typical glazes for creating a thixotropic slurry, but that is not a problem since this recipe works well as is.

B-Mix is a popular high-ball clay very plastic grey cone 10R stoneware in North America. The two mugs on the left have pure Ravenscrag Slip on the inside (the middle on the outside also), it fires almost transparent with a slightly silky surface. Pure Alberta Slip is employed on the outside of the left one and the inside of the right one. The outside of the right one is RavenTalc silky matte. In all cases the Ravenscrag and Alberta Slip are mixed half-and-half calcined and raw. B-Mix fires dark enough and with enough specks that a normal transparent glaze is not very interesting. But these Ravenscrag ones look much better (for use as a liner glaze). 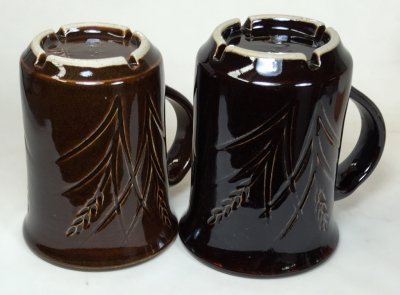 These mugs are the same clay and glazed with a 50:50 raw:calcine Alberta Slip mix (GA10-A) and fired to cone 10R. Both looked like the one on the left. The one on the right has a decal on the inside, it was fired to 1500F. This firing has made the glaze significantly glossier, darker, deeper and more vibrant. Why? I have no idea. I have 20 more using this glaze and made from this and other clays, they all did the same thing. 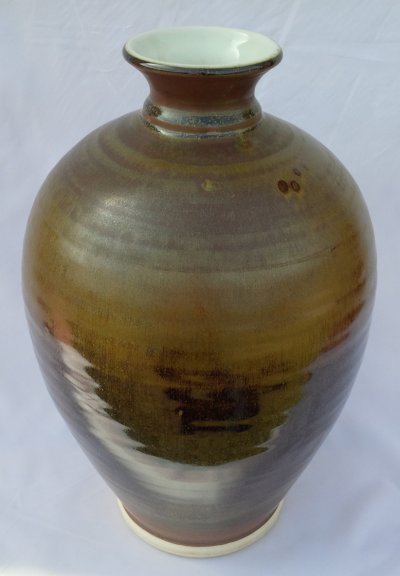 A 13 inch vase glazed with 100% Alberta Slip fired at cone 10R. The glaze was sprayed on. It is about 60% calcine and 40% raw powder. When it is very thin, as on the shoulder, it is quite metallic and varies from deep red to brown (depending on thickness). Where thick it is a tenmoku high gloss. The spots on the shoulder are thicker areas that have glossed.

The far left has 1% iron oxide, the far right 7%. Crystallization of the iron begins around 3%.

B-Mix with Ravenscrag Slip inside and Alberta Slip outside 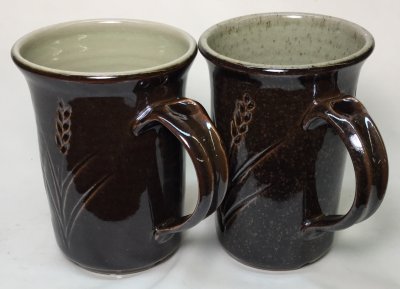 Fired cone 10R. The one on the right contains 10% of Plainsman A1:St Rose Red mix to add speckle.