This is the product of a series of tests where the percentage of nepheline syenite was progressively reduced (from 25% originally) to reduce the firing shrinkage of to match H550 (it is important that engobes shrink the same as the body or they will flake or crack off during firing or later during ware use). Amazingly only 10% nepheline syenite is needed to make this fit Plainsman H450, H550. Again, do not use this recipe on porcelains (e.g. P700) or whitewares (e.g. H570, P600), the recipe needs more nepheline for them (to increase firing shrinkage, we have another recipe, L3954J that does this).

This engobe is very plastic so it sticks well to leather hard clay.

The zircopax makes this fire quite white. If you want black, switch it to 5-10% Mason 6600. Be careful with other stains, some of them will flux and increase the fired shrinkage.

To mix this follow the instructions on using an engobe at the Digitalfire Reference Library. Our approximate recipe is: Mixed 3000 grams powder with 2380 water to get SG 1.47. Darvan 9.5g. That amount of Darvan works in our studio with our water and material (yours will be different). Start with with 8.0 and add more until it is thin enough. Be super careful not to add too much (if you do it might be necessary to thicken the engobe with some Epsom salts, but again, a little at a time to avoid gelling it). 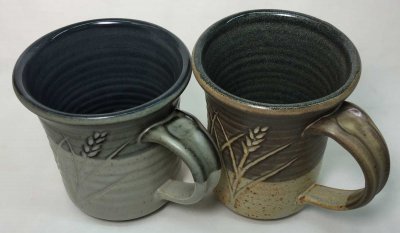 Clay is Plainsman H450. The L3954N black engobe was applied at leather hard stage (on the insides and partway down the outside). The G1947U clear glossy glaze over it on the inside produces a deep and vibrant hue (left). The inside glaze on the right is GR10-C Ravenscrag silky matte. The outsides are GR10-J Ravenscrag Dolomite matte with a little added cobalt and iron (for blue and brown). 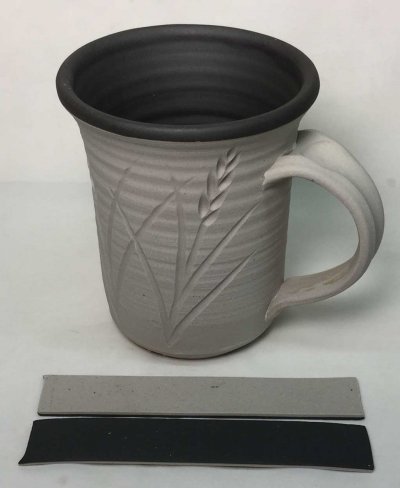 The body is Plainsman H570 (0.5-1% porosity). Notice the EBCT (engobe compatibility) test bars in front. These sandwich the body and the engobe together in a thin strip, differences in fired shrinkage curl the bar during firing (toward the higher shrinker). The straighter the bars fire the better the fit. My regular engobe for use on our buff stoneware, L3954N (Plainsman H550, 2-3% porosity), has lower fired shrinkage than this (since that body is less vitreous). This one increases the shrinkage (with 5% more nepheline syenite, 5% less silica and 3% less ball clay). This employs 10% Mason 6600 stain to produce the jet-black fired product.