One of the most popular Albany Slip glazes was 11% lithium, 4% Tin and 85% Albany Slip. A portion of the Alberta Slip must be milled or the glaze will crack during drying.

This recipe reduces the lithium to reduce shivering problems (that were common with this) and it employs a frit to help melt the glaze. The surface is very smooth and variation in color with thickness is very good. The added alumina hydrate darkens the color and slightly dulls the very glossy nature of the recipe, you can leave it out if you want.

Visually, this glaze works very well on porcelain showing variegated effects even on smooth surfaces, especially where very thinnly applied. However it crazes on porcelains, please use the alternate lithium brown recipe. 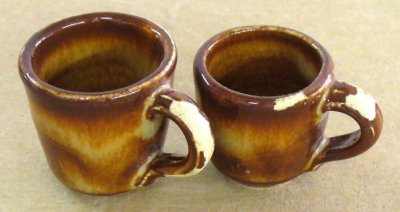 These mugs have experienced very serious shivering. This is an Albany Slip glaze with 10% lithium carbonate, it is known to have a very low thermal expansion. This problem can be solved by reducing the amount of lithium or adding high-expansion sodium or potassium. However these fixes will likely affect the appearance. 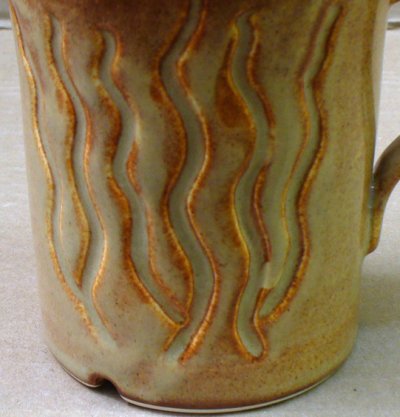 This has been applied very thinly, yet still covers very well and exhibits alot of variation even where thicknesses are slightly different.