In ceramics, the chemistry of a glazes are expressed as formulas of oxides. There are direct links between the oxide chemistry and the fired physical properties.

Conceptually we consider fired ceramic glazes as being composed of 'oxides' (materials contribute these). The ten major oxides likely make up 99% of all base glazes (and materials we use). The oxide formula of a glaze "explains" many details about the way the glaze fires (provided all the materials in the glaze dissolve in the melt). That means we can predict what will happen during firing and we can propose changes that have a high likelihood of fixing a problem or moving a glaze property in a certain direction. The chemistry of glazes are normally expressed as formulas (sometimes people refer to "glaze formulas" when what they actually mean is "glaze recipes").

A formula expresses an oxide mix according to the relative numbers of molecule types. A formula is suited to analyzing and predicting properties of a fired glaze or glass. It gives us a picture of the molecular structure that is responsible for fired behavior. Since the kiln fires build these oxide molecules one-by-one into a structure, it follows that one will never fully 'understand' why a glaze fires the way it does without seeing its oxide formula.

Notice in the above that oxides are grouped into three columns: the bases, acids, and amphoterics (or simply as the RO, R2O3 , and RO2 oxides; where "R" is the element combining with oxygen). Actually, the ratio of R to O is significant. The right column has the greatest oxygen component, the left has the least. Simplistically, we can view these three groups as the silica:alumina:fluxes system. This latter convention is not really correct because there are more glass builders than SiO2 , other intermediates besides Al2O3, and the RO's do more than just flux. But because this method evokes immediate recognition, let's use it anyway. Ancient potters referred to these three as the blood, flesh, and bones of a glaze (not a bad way to think of it).

Insight-live normally determines the unity of formulas it calculates automatically. If the RO oxides total is greater than R2O3/2 it is deemed flux unity. Otherwise it is R2O3 unity. However by clicking on the "Unity" heading above the formula users can cycle between automatic unity, RO unity, R2O3 unity and NoUnity. 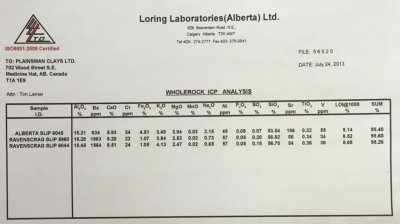