ASTM C24 -01
Pyrometric Cone Equivalent is measured by making a cone of the material and firing it until it bends to 3 oclock.
The cones are the size of small orton kiln-sitter cones and they are set into special refractory rings that hold them at the correct angle to bend inwards. A ring can hold many cones so many tests can be done in one firing. The ring is fired in a small kiln capable of cone 25-30 (clays that normally mature at cone 10, for example, might not melt until cone 20 or higher). When placing the ring into the kiln the placement of the cones is noted (to identify them) and the temperature at which each bends is recorded. 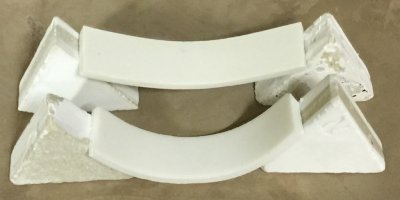