Since the 1970s, Plainsman Clays has been importing thousands of tons of refined materials from all over the US (and even other parts of the world) to make porcelain bodies. However, for us, the incredible rise in cost of shipping is forcing a reassessment.

It is important to note that porcelains are such, not just because they fire white, but because they fire vitreous and strong. Where pieces are being covered with opaque glazes, the color of the underlying porcelain is not an issue. The Saskatchewan clays I am studying contain the natural feldspar, quartz and a variety of clay minerals, all blended by nature, to produce porcelains, that although not white-burning, rival or exceed the strength and durability that can be achieved by using industrial minerals. Some of these clays can be fired well past the point of maximum density, developing a more and more glassy surface, yet resisting warping, even of very thin-walled ware. Mineral-mix porcelains always require the addition of often costly bentonites to achieve enough plasticity to make them workable, but these Saskatchewan clays have natural plasticities. Many areas around the world have similar materials, some are much whiter that this.

3B is the smoothest material Plainsman mines in the Whitemuds (no sand detectable to the touch). And the whitest in the raw state. It fires vitreous at cone 6-8 (2200F). It is at the middle of the formation that we mine, about 1 metre thick. We depend on this material for many clay bodies and the depletion of 3B is the primary motivator in doing new minings. Recently we have discovered that if slurried and sieved to 325 mesh, quartz particles are revealed. When removed, the resultant material is a plastic ready-to-use porcelain for cone 2-4. One that fires to steel-like strength. It is not even possible to make a body like this using traditional mixes of industrial minerals! 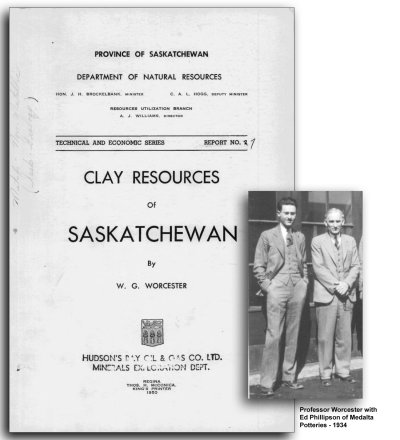 Mother Nature's Porcelain: The lumps in the quarry 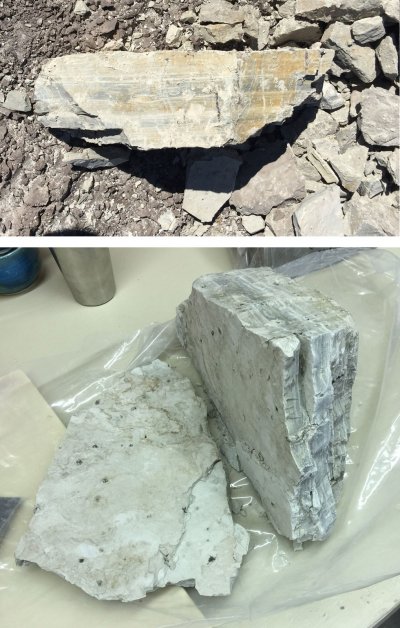 This is from a quarry mining the Whitemud Formation in southern Saskatchewan. This layer is extracted from the top of a hill at the bottom of a valley. It is more than 50 meters below the table land above. The lumps are extremely dense and very heavy. They exhibit this horizontal layering, a clear indication of the sedimentary nature of the deposit. When I see this I know the clay is exceedingly fine particled. There are flecks of high-carbon material and some tiny iron particles. This lump is quite wet, about 12% water. When it dries out in breaks down into thousands of pure-white pieces, these slake quickly in water to create a creamy smooth slurry from which I can easily sieve out the carbon and iron particles. 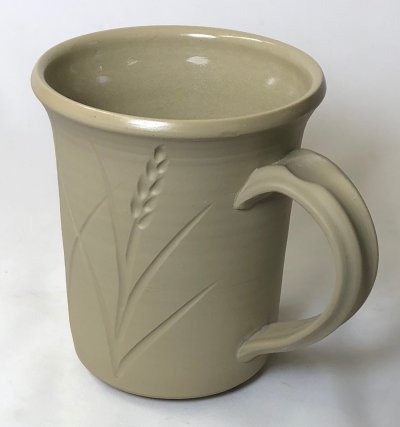 Mother Nature's porcelain with no glaze! 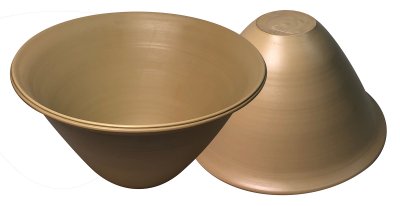 Fired at cone 6. It is impossibly vitreous, the surface is smooth like a glaze. And it has not warped. In fact, other pieces made from it having walls as thin as 2mm did not warp either!. This comes from a two-foot-thick section of the 3B layer from a Plainsman Clays quarry near Ravenscrag Saskatchewan, Canada. A cretaceous dust storm! It is plastic and feels impossibly smooth. Smoother than any commercial porcelain. It does not fire white because mother nature did include a little iron oxide. It accepts glaze like a porcelain. 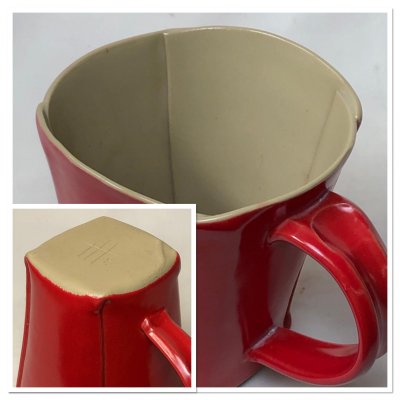 This is made from 100% of a natural clay (3B) from the Whitemud formation in Ravenscrag, Saskatchewan. I rolled the plastic clay into a thin layer, cut it into a cross-shape, drape-molded it over a plaster form and then slip-joined the seams. It fires very dense and strong (to zero porosity like glass!). It holds together well and joins well with its own slip. Although not super plastic, it is smooth and fine-grained like a commercial porcelain body. I add 1-2% bentonite to make it more plastic when needed. It has the ability to be rolled extremely thin and yet does not warp in the firing! This mug has a weight-to-volume ratio of 2.08 (the weight of water it will hold compared to its own weight).

Mother Natures's porcelain - Mug unglazed on the outside

This natural porcelain is so vitreous that no glaze is needed for a functional surface. Fired at cone 6. Clear glazed inside is GA6-B Ravenscrag Slip. There is a small crack on the lower handle join, I am continuing to learn how to dry these pieces crack-free. By Tony Hansen.

Slab-built using my 'pie crust' technique. Cone 6 C6DHSC slow-cool firing schedule. The glaze is GA6-C Alberta Slip rutile blue. The raw porcelain surface exhibits a stunning deep-blue color (although not visible since this piece is glazed). However the blue does bleed up into covering glazes, making them more vibrant. And it highlight contours since the thinner glaze layer shows more of the underlying blue. Mug by By Tony Hansen