A project to use 3D printing to create molds for making bricks. I am inspired by bricks made across the Canadian prairies during the 19th and 20th centuries. I will experiment with making both compressed earth blocks and fired bricks. I am particularly excited about the possibility of making metallic bricks using Plainsman Fire-Red and St. Rose Red materials (firing them at cone 10R). And about using their Kaosand - it is only suitable as a minor ingredient in plastic bodies but has enough plasticity to hold together as a brick (and should dry quickly with minimal shrinkage). 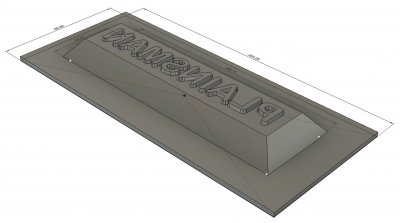 The "frog" is the indentation in pressed bricks. I drew this design in Fusion 360. For initial testing I was able to oil the 3D printed form (having no infill), compress the clay directly against it and get good extraction. This is version 2, I maximized the amount of draft on the letters (it is a tricky process because of some of the tight angles). This is a very good example of the power that 3D printing puts into the hands of a small business. Thanks to Keeley Haftner for opening my eyes to this possibility. 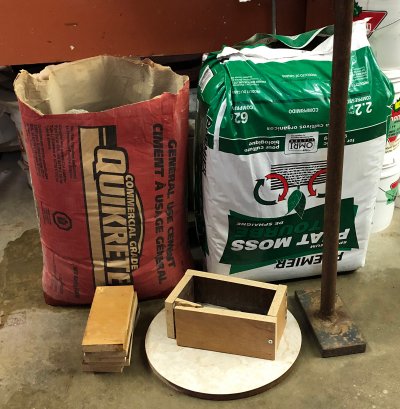 I was using a heavy metal tamper to force high-water-content powder (about 12%) into a wooden form to make bricks. I use snug-fitted wooden spacers against the clay itself and deliver the blows to them. It became quickly evident, that even with 3/4 inch wood, my tamper can deliver greater pressure than the mold can withstand. I then switched to 3/4 inch plywood. With the same result! A metal mold seemed to be the next step but that was going to involve considerable expenditure. And were other problems: Removing the brick after pressing it in would be very difficult, metal molds are only practical if you have a machine with both pressing and extraction cycles. Another issue was getting a good logo impression on the frog: The clay is not hard enough to pull away from the mold without edges and pieces breaking off. In the end, for making sample bricks, a plastic mold and wetter clay are a better option. 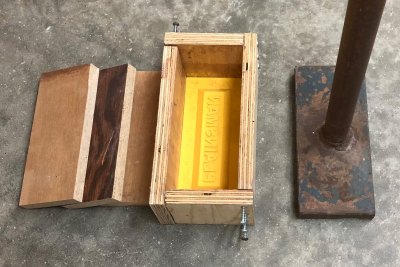 The fact that it broke was not the only issue. A mold that I could disassemble seemed like a good idea but the pressure developed during ramming sticks the clay to the wood is such a way it is difficult to part them. This was another step is realizing, that for my goals of just making some demonstration bricks, it would be better to use a plaster mold and softer clay. 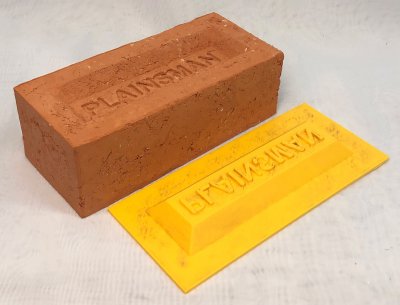 The lettering on the frog does not have enough of a draft to release well. The oil soap I was using as a parting-agent did not work as well as canola oil. And the water content of the clay was too low to make it compress enough to get good surfaces. 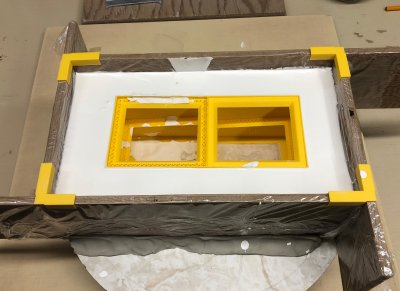