Barium carbonate powder is dense and white and is manufactured either from the mineral barite (BaSO4) or from barium chloride. Subsequently a precipitation process is used to get the carbonate form. There are several crystalline forms of BaCO3, alpha is the most stable.

Barium carbonate is very stable thermally and does not readily disassociate unless at least some CO is available in the kiln atmosphere (i.e. reduction). BaCO3 is reduced to the unstable BaCO2 in the reaction:

While BaCO2 has a high melting temperature, it will break down much readily in a glaze melt (liberating the BaO for glass building). It decomposes even more readily during glaze melting in a reduction atmospheres. The dissolution process happens most quickly if BaCO3 is present in small amounts (e.g. 5% or less). Even if present in larger amounts, the glaze matrix can solidify with both types, one participating in the glass microstructure and the other acting as a refractory filler, opacifier and matting agent (especially in low temperature glazes). Effects produced when baria is acting as a filler are sometimes mistaken for those of a true baria crystal matte. Such will likely leach toxic BaO (other oxides will opacify or produce a low fire matte i.e. CaO, MgO, Alumina, Zircon).

Barium carbonate produces gases as it decomposes and these can sometimes cause many pinholes or blisters in glazes. There are barium frits available (e.g. Fusion F-403 has 35% BaO), incorporating one of them to source it instead is a classic application of glaze chemistry calculations. The resultant glaze will be more fusible and will have better clarity and fewer defects.

In art ceramics barium carbonate is popular for the production of classic barium crystal mattes, BaO readily forms crystalline phases during cooling. These are dependent on adequate kiln temperatures, cooling cycle and the chemistry of the host glaze (a slightly reducing atmosphere is also beneficial). Some have observed that in some formulations, barium crystallizes so well that it will occur even with very rapid cooling. Barium can act to initiate crystal development in other chemistries, for example metallic glazes can benefit by the addition of some barium carbonate.

BaO can often be sourced from a barium frit (like Ferro CC-257) instead of raw barium carbonate, provided that the percentage is not too high. Do not assume that BaO is necessary in every glaze in which it appears. In some recipes BaO can be substituted for SrO or CaO and even MgO (using glaze chemistry software of course) without losing the color or surface (bright glossy blues, for example).

Barium carbonate is commonly added to clay bodies in small amounts (0.2-0.8%) to halt fired surface scumming or efflorescence It is slightly soluble in water and provides Ba++ ions to link with SO4-- ions in the water to form BaSO4 (barium sulfate). This new sulfate molecular form is much less soluble (2-3 mg/L), so it stays internal (rather than migrating to the surface during drying). However companies try minimize the use of barium (or even high clays with high soluble salts) because the barium sulphate generates sulphuric acid during firing and it corrodes kiln refractories. To get the best dissolution it is best to add the barium to the water first and mix as long as possible, then either add the water to the other dry ingredients (for plastic bodies) or add the other ingredients to the water (for slips). 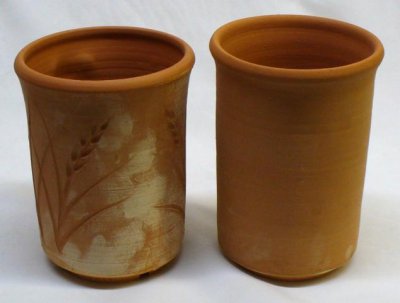 Two bisqued terracotta mugs. The clay on the right has 0.35% added barium carbonate (it precipitated the natural soluble salts dissolved in the clay and prevented them coming to the surface with the water and being left there during drying). The process is called efflorescence and is the bane of the brick industry. The one on the left is the natural clay. The unsightly appearance is fingerprints from handling the piece in the leather-hard state, the salts have concentrated in these areas (the other piece was also handled, but has very little marking).

The same clays except for one tiny difference 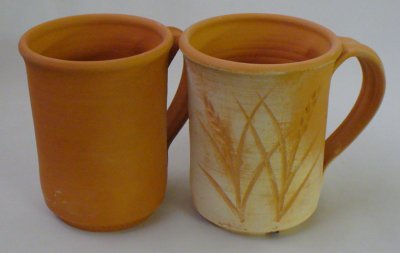 An example of how effective barium carbonate is at precipitating the soluble salts in a terra cotta clay. These two unglazed, cone 04 fired, mugs are made from the same clay, but the one on the right has 0.35% added barium carbonate. 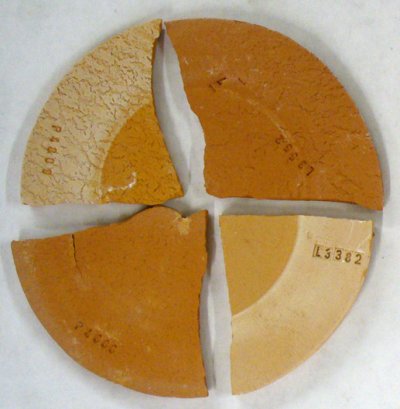