This is for potters firing periodic electric kilns.

Hold at the first step as long as you need to to make sure all water is expelled. This could be an hour for light ware or ten hours for heavy ware. Turning your ventilation fan on will create some draft in the kiln to carry away the water vapor (if you do not have a ventilation system, then you can prop the lid during early stages for heavy loads). Although 250F is higher than the boiling point and we approach it quickly, this has not been found to fracture ware. Holding it at any temperature lower than that will not expel all the water.

Good ventilation is important up to, or even well past red heat, to maintain an oxidation atmosphere to remove crystal water and organics and avoid reducing any iron present (which could black core and flux the clay in the next firing). If you do not have a ventilation system consider slowing down the rate of climb for step 2 if bisque ware shows variation in colors (indicating incomplete oxidation).

Step 3 slows the climb during the last 100F approach to final temperature (about cone 05). This is a good idea to help even out temperature. Fire hotter if your ware is absorbent enough to glaze without difficulty (higher is always better because it burns out more carbon and crystal water). If ware is not strong enough to withstand handling during glazing you need to bisque hotter. If glazes are not going on thick enough it could be because ware is too dense (bisque fired too hot, e.g. dense terra cotta or fritware). But, consider whether its specific gravity and thixotropy are right. If they are the glaze will go on thick enough even if bisque ware is dense.

Hold the temperature longer if the kiln is densely packed.

When ware is thin and of even cross section (and leaves step one completely dry), the rate of climb from 120C to 945C can be quite fast (up to 500F/hr should be fine). If ware is thicker, slow it down.

Many people slow down the climb around 550C to avoid quartz inversion failures, but we have found this is not an issue in bisque firings. Others slow down the cool through this range also, but since bisque ware it porous we have not found cracking an issue with free-falling temperature.

A crack on the bottom of a bisque fired mug 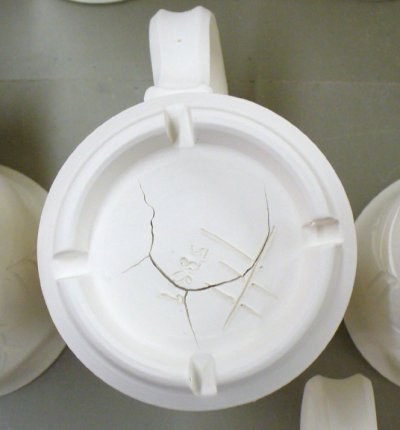 The stresses that created it were likely already present in the dried ware. 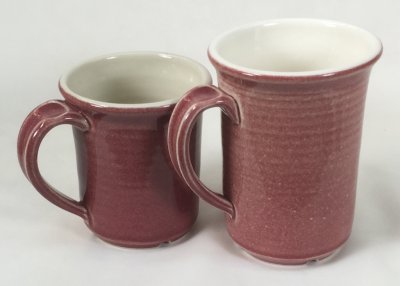 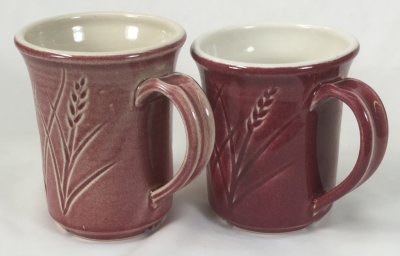 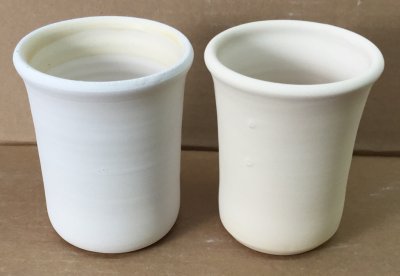 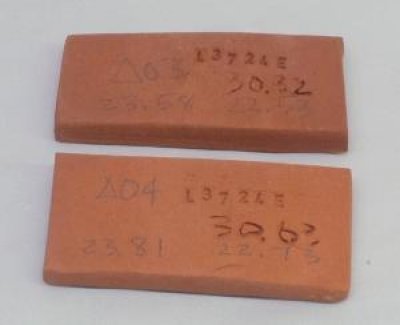