In 2003 this material became unavaiable. There were problems with consistency and lack of compatibility with light colored materials also produced at Gladding, McBean & Co. However as of Mar 2004 it was again available. The reintroduction was accompanied by a new data sheet on which the numbers only add up to 92.8? In addition the material is much more expensive and is more coarsely ground (some 30 mesh grit) so some companies began using substitutes. In March 2006 is was again unavailable.

Newman is a red burning, low plasticity, low dry strength fireclay useful in both plastic and casting bodies to impart red color. It has powerful staining abilities (beyond what its percentage of iron suggests). For example, even if diluted to 50% in a recipe the body can still fire bright red in oxidation. Newman clay has a very fine particle size coupled with some large impurity particles in the plus 50 and even plus 30 mesh range. The crude material color is bright orange. Not surprisingly, bodies containing it complement it with ball clay and feldspar.

Coming up with an economical substitute for this material is a tricky task both because of its unusual properties and unique combination thereof. There is no other commonly available smooth refractory red burning clay material in North America. Thus some have suggested substituting various low and mid-fire red clays to impart color to clay bodies (i.e. Carbondale Red, Redart). However this is not practical since these materials flux the body producing a more vitreous and browner fired result. Even if feldspar is removed from the body to compensate the red coloration is still most often compromised to brown. Some have suggested mixes of fireclays mined in the same area (i.e. IMCO 400, 800, Lincoln Fireclay). However these are not nearly refractory enough either (they are not real fireclays despite the naming) and they have far less iron. Two other possible alternatives are refractory and red burning: Plainsman Firered, Plainsman St. Rose Red. These are not as fine grained as Newman and contain iron speckle or other impurities, testing would be needed to confirm their suitability (likely for sculpture or coarse stonewares they would be OK). Newman has another curious property: a high firing shrinkage despite its refractory nature. Substitutes could thus produce a lower fired shrinkage in the body (this is not a bad thing of course unless continuity of fired dimensions are important).

We have compounded a series of mixes to develop a recipe that replaces Newman (both from physical properties and chemistry perspectives) and have compared their merits by inserting them in place of Newman in a body recipe calling for 50%. We have evaluated color, absorption and fired shrinkage over a range of temperatures, drying shrinkage and drying performance, particle size distribution, etc. So far one mix of materials has proven quite similar to the character of the color, the maturity, the smoothness and the nature of the plasticity. It is code number L3179H and has Imco 400 Fireclay - 67, Silica - 27, Iron Oxide Red: 3, Iron Oxide Yellow: 3. The mix of red and yellow iron were used to duplicate the raw color, you can use straight red iron. Below there is another option.

Considering this analysis and the appearance and fired properties of the fired test bars you might find that a viable substitute would simply be 92% kaolin and 8% iron oxide. 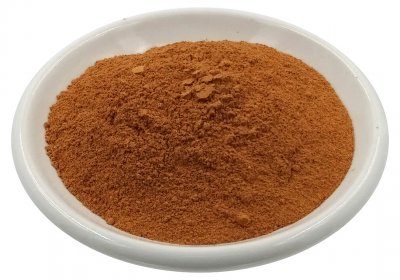 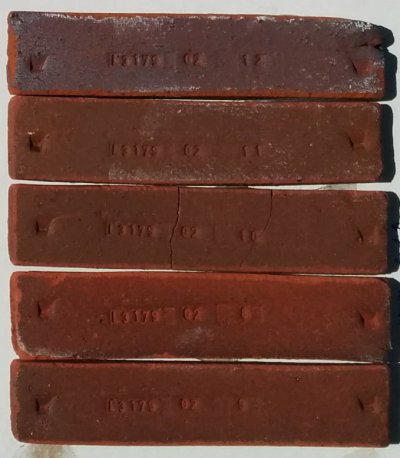 New is a high temperature red burning fireclay. These fired test bars show how high the iron content is, turning it bright red at all temperatures, even cone 10R (top bar). Other bars are cone 11, 10, 9 and 8 oxidation (top to bottom). Notice it does have some soluble salts that darken the color in reduction.