A white very light-weight powder (and bag of this material is like a bag of feathers). It is practically insoluble in water. This is not the same material as magnesium carbonate (magnesite).

MagCarb is very refractory, it does not decompose and release its MgO to the glaze melt as readily as other sources. It is a good example of the need to consider mineralogy and material-level physics in addition to chemical makeup (when using glaze chemistry to adjust and fix glazes). Two glazes may have the same calculated chemistry, but the one using the MagCarb to source the MgO will not be melted as much.

MagCarb mattes glazes. MgO in sufficient percentages in glaze melts, is a classic matting agent. However, since magnesium carbonate is so refractory and does not readily release MgO, the matting mechanism is simply that it is refractory as a material and inhibits smooth-out of the melt (especially if added in larger percentages or employed at lower temperatures where making a good matte is more difficult).

Magnesium carbonate crawls glazes because it decreases melt mobility. The exceedingly small particle size of the material increases shrinkage. MgO, in the portion that does disperse into the melt, has a high surface tension, that definitely plays in the melt pulling itself into islands. Up to 35% can be found in some recipes.

MagCarb has a very high Loss on Ignition, this could cause glaze surface issues. Dolomite and talc more readily release their MgO to the glaze melt for a higher temperature glazes. There is conflicting information on the decomposition temperature, sources report figures that vary from 350C to 650C. Thus it is possible that a host glaze could be already fluid before this material has finished gassing, trapping it within to create the glass equivalent of an Aero chocolate bar. If you use a large percentage of this in a glaze (for crawling for example), it may be wise to halt the kiln at 650C and soak during the fire up. Or do a test firing to 700C, cool the kiln quickly and check the melted state of the glaze.

It is added (.12-.25%) to flocculate clay slurries, improving and stabilizing the set and suspension characteristics.
It is used as a electrolyte in both ground and cover coat enamels.

An additive that will make a glaze crawl 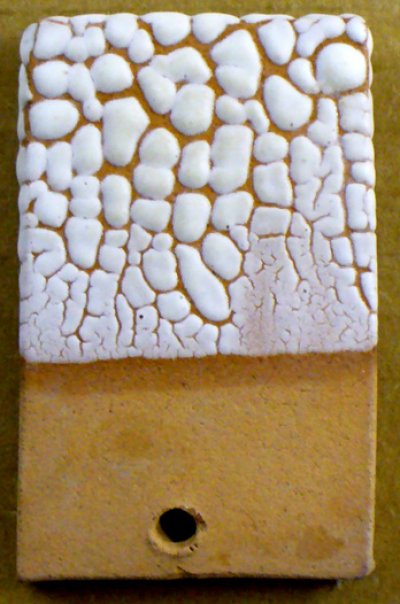 Light magnesium carbonate has been added to a low temperature terra cotta white glaze (about 10%). It induces crawling. It also mattes the glaze because it sources MgO. “Snakeskin” recipes to produce this effect can call for much higher percentages, but of course, fired properties (like color, gloss, thermal expansion) will be much more affected. 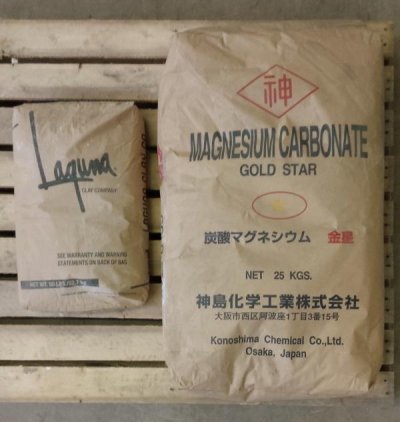 A bag of magnesium carbonate beside a bag of feldspar. Although the former weighs 25 kg (vs. 22.7 kg for the feldspar), clearly it is a dramatically lighter (per volume unit) material. Lifting that bag of Mag Carb feels like lifting a pillow! 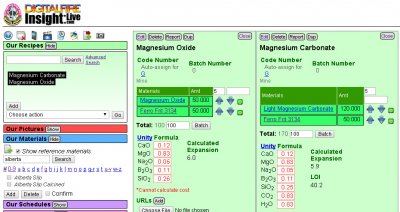 Here is a screenshot of side-by-side recipes in my account at insight-live.com. It takes 120 mag carb to source the same amount of MgO as 50 mag ox. I just made the two recipes, went into calculation mode and kept bumping up the magcarb by 5 until the chemistry was the same. Note the LOI of the magcarb version is 40. This one would certainly crawl very badly. 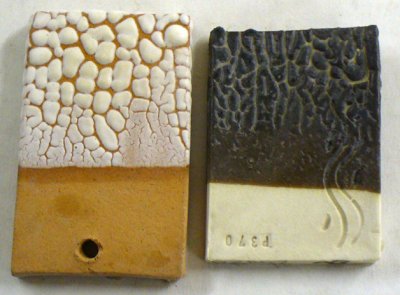