Dolomite, as a rock, is called "dolomitic limestone". It is a carbonate, similar to limestone, but having the chemistry CaMg(CO3)2 (instead of CaCO3). Manufacturers blend materials in a controlled fashion to produce a consistent product having the ideal mix of calcium and magnesium carbonates to approximate the formula CaMg(CO3)2.

In ceramics, dolomite powders are the most inexpensive source of MgO and CaO for glazes and frits. 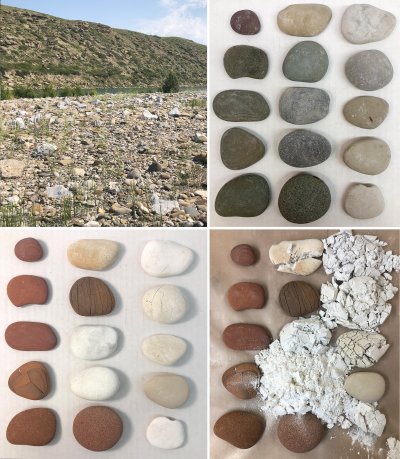 I gathered these downstream from the Oldman River dam in southern Alberta, it exits the Rocky Mountains nearby. I want to paint on underglazes, clear glaze over them and fire to cone 4-6. Upper right: The rocks as I gathered them. Lower left: After firing to cone 04 (about 1900F). Lower right: After I poured water on them! Seven disintegrated in front of my eyes. With sound effects, high heat, even steam! That means they are all limestone or dolostone. The firing drove off the carbonate (they lost considerable weight and converted to calcium oxide, or Quicklime). When the water is added hydrated lime (calcium hydroxide) is produced. #5 and #10 cracked badly. The unfractured ones appear to be iron-bearing silt and sand stones, they can withstand considerably higher temperatures.