This material was developed by Plainsman Clays as a substitute for Gerstley Borate. The development effort took place during the early period when the industry was reacting to the demise of the material and the producer was failing to communicate the true status of continuing supplies. Other companies also introduced similar products at the time. Later Laguna Clays began processing a last stockpile of the material at mine.

Theoretically Gerstley Borate is calcium borate. But the real material is more complex, it is actually calcium-magnesium-sodium borate with added quartz and clay. The main mineral sources of these are ulexite, colemanite, calcium carbonate, dolomite and a micro fine clay (the reason for Gerstley Borate's plasticity). Cadycal was used as a substitute for the colemanite and Hectalite for the clay (the latter because it sources needed MgO also).

It was thought that with a reliable analysis of GB a mix of the above materials could be crafted to produce the same chemistry and that it would also have the same melting properties. However this did not prove to be the case, the natural mineralogy of GB supplies the oxides in a form that has a more active melting profile. That meant it was necessary to compromise the chemistry match (using a higher B2O3 content) to get the same melt fluidity at low temperatures. That is what this recipe is.

While no longer manufactured, the process by which it was developed is over interest to technicians. Visit http://gerstleyborate.com for a material-by-material and oxide-by-oxide analysis of the similarities and differences between boraq and gerstley borate. 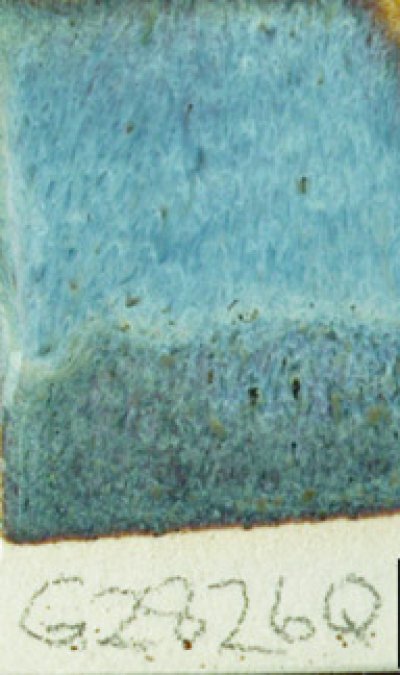 Floating Blue is a popular cone 6 glaze recipe used by the pottery community. Gerstley Borate is a material commonly used in recipes as a melter. The recipe produces a variegated surface but is difficult to replicate since its fragile mechanism makes it susceptible to variations in thickness, firing schedule, clay body and material supplies.