In ceramics, it is used primarily in clays and glazes to achieve fired speckle (including the brick industry). This is the same material as manganese dioxide powder, it is simply not ground to a fine powder. Various sources do not have consistent particle size distributions. The material looks more like a powder than might be expected so the manufacturers are not screening out the fines. We have seen variation in the minus 100 mesh from 10-30% and +65 mesh from 20-40%.

Typically a 60-80 mesh material is used in amounts around 0.2-0.3% in bodies firing from cone 4-6. The granular particles do not melt at cone 6 but they will bleed into glazes. They begin to decompose at cone 7, and thus will bloat bodies containing them at that temperature and up (actually bloating will often start at cone 6).

Pyrolusite ore is a source of manganese used widely in industry for the manufacture of manganese steel, alkaline batteries, decolorizing glass agents. Pyrolusite can contain small amounts of quartz (e.g. 3%) as well as barium compounds (e.g. 2%) and trace amounts of lead (e.g. 0.2%). It is typically about 75% MnO2. 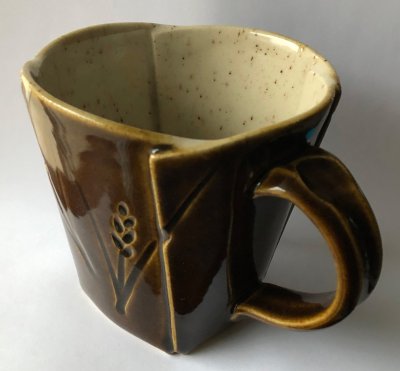 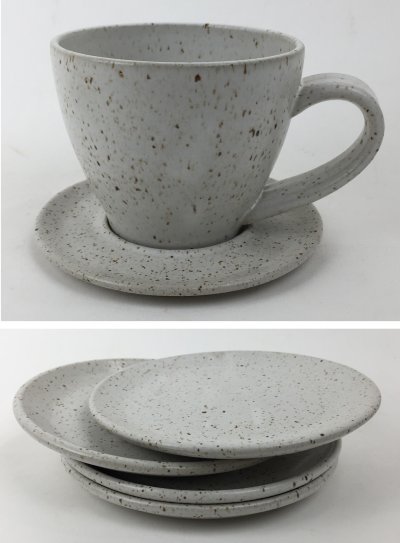 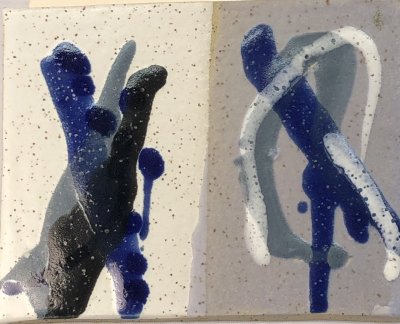 Firing: Cone 6 oxidation. Glaze: G2934 matte. The body contains 0.2% manganese 60-80 mesh. Multiple layers of the underglaze are not able to prevent the manganese from bleeding through to stain the surface. 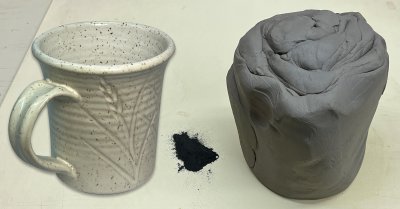 This is actually quite easy to do: Just wedge the clay over the manganese spread out on the board, when the board is clean turn the slug sideways and cut and layer about 20 times (to get 1 million layers). Then wedge normally. Only 0.2% manganese is needed (as a percentage of the dry clay). Since pugged clay contains 20% water it is easy to calculate the dry weight of this piece. For example, suppose this weighs 2 kg: 80% of that is 1.6 kg or 1600g. 0.2% of 1600 is 3.2 grams. Shown is the kind of mug I get. The outside glaze is G2934Y silky matte (opacified with tin) and inside glaze is G2926BW glossy white. It was fired at cone 6 using the PLC6DS schedule.