Umber is a processed from manganese-enriched goethite, a naturally occurring inorganic iron oxide. It is a brown earth pigment that is darker than the Ochre because of its manganese and iron oxide content. It is highly valued as a permanent pigment either in the raw or burnt state. Umber is lightfast, insoluble in water, resistant to alkalis and weak acids and non-reactive with cement, solvents, oils, and most resins.

This is preferred in ceramics over ochre because of its much higher iron content.

These are the same material, however the one on the right has been burnt to 600F. At this surprisingly low temperature the color transforms into a deep redish brown. 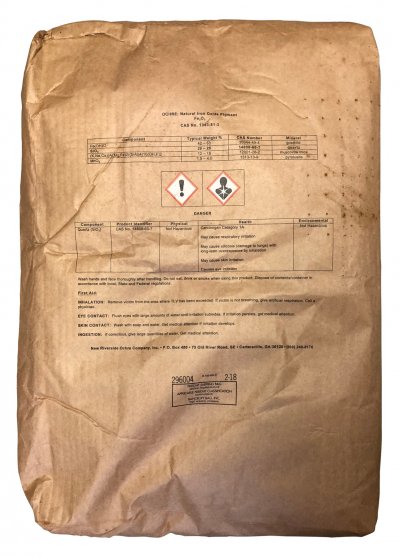 Sold by Arlimin but made by New Riverside Ochre Company.

The umber is bubbling the underglaze in these clay rocks 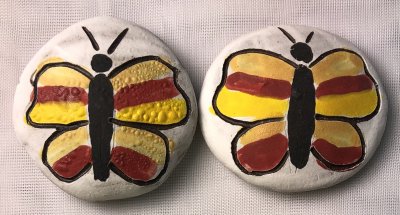 The body is Plainsman Coffee clay, it is stained black with 10% raw umber. I painted Amaco Velvet white underglaze over the black clay (in the leather hard state), then over-painted the colors. When they were dry enough to handle, I cut the black lines using a Kemper WS sgraffito tool. The rock on the left is fired to cone 6, on the right to cone 4. Thus, at some point between cone 4 and 6, the umber in the body is generating gases of decomposition. Glazes can bubble it through but this underglaze cannot pass it. To continue working at cone 6 I made my own body by mixing Mason 6600 black stain into a porcelain.