The soda ash that the ceramic industry knows is a refined fine granular white material. It is very pure chemically and has been calcined (often referred to as dense soda ash). Grades (light, natural and dense) differ in the percentage of crystal water, particle sizes and bulk densities (the light grade has around 40 lbs/cubic foot, whereas dense is around 70). The dense grade may still lose up to 3% of it weight if calcined to about 400F.

The common ceramic use of soda ash is as a soluble deflocculant in ceramic slips and glazes. It works well in combination with sodium silicate to produce body slips that do not gel too quickly and whose rheology can be adjusted for changes in the hardness of the water (e.g. talc/ball clay body requires about 0.55% sodium silicate and 0.18% soda ash by weight of the clay powder, that would be 125g/40g). Higher soda ash proportions (vs sodium silicate) will produce a slip that gives a softer cast (stays wet longer). The total soda ash and sodium silicate amount should be tuned to create a slip that will eventually gel if left to stand. This thixotropic behavior will prevent it from settling. Sodium carbonate is also used for thinning glaze slurries.

Soda ash is not normally used as a source of Na2O in glazes because it is soluble. However it is used as a key source of sodium in frits and glass. Its solubility makes it an ideal flux for Egyptian paste glazes. Although soda ash is a pure source a soda, a powerful flux in ceramics, by itself the powder of the dense version only begins caking at 1500F.

Soda ash production goes back to ancient times. Today, it is refined from Trona ore in the US (where the largest deposits are found). The ore is calcined, dissolved and re-crystallized (other processes are used in other parts of the world). Soda ash is used in a very wide range of industries (glass is the single biggest user) so its chemical, physical and bulk properties are well understood and documented (General Chemical Industrial Products publishes an excellent booklet describing soda ash).

Monohydrate soda ash has 14.5% crystal water. This material is a textbook study of solubility and decomposition physics.
The individual crystals are fragile and handling equipment has to take this into account to preserve the grade.
It is not considered toxic, although micron sized particles can be generated during handling.
Caking can occur during storage if the material absorbs water from the air.

An example of a 50 lb bag of soda ash (or sodium carbonate). 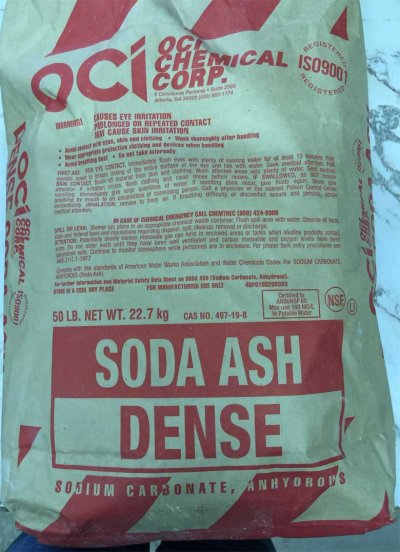 Soda Ash is soluble and is thus not useful in most ceramic glazes. However that very solubility makes it very useful to control the electrolytics of ceramic slurries. This is the dense variety, non-hydrous.