This is one of the many colors of iron oxide. More accurately, it is an iron hydroxide. Yellow ochre clay contains yellow iron oxide. In ceramics red iron oxide is most commonly used in glazes and clay bodies, but black is also used. Yellow is the least color-stable form. Yellow iron oxide is a synthetic material of very fine particle size (but not as fine as black or red).

Theoretically, any form of iron could be used to source Fe in the fired ceramic product (of course they lose different amounts of volatiles on firing so they cannot be substituted gram-for-gram). However in practice this is not the case. Yellow iron, in our tests, for example, does not stain a glaze but it does stain a clay body. The reason is not apparent.

Yellow irons can be used where raw color or other raw properties are important to the manufacturing process or color of the unfired product and where a less messy material is desired. Yellow iron is not as fluffy and light as black, but more than red. It does not agglomerate as badly as red, but more than black. It is coarser in particle size and does leave some lighter colored residue on a 325 mesh screen (up to 8% in one specimen we tested whereas the others left zero).

Yellow iron is also used in paints, enamels, concrete colorants, plastics, rubber, and paper where permanent yellow is required. It has excellent hiding power, absorbs ultraviolet light, is compatible with a broad range of vehicles, disperses well in aqueous and solvent systems, does not contain heavy metals.

One process of manufacture involves precipitation of ferric oxyhydroxide followed by purification through washing, drying and milling. 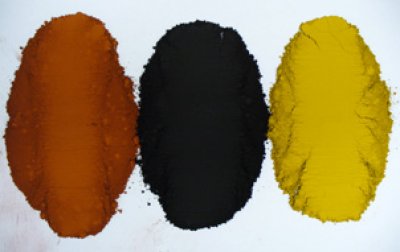 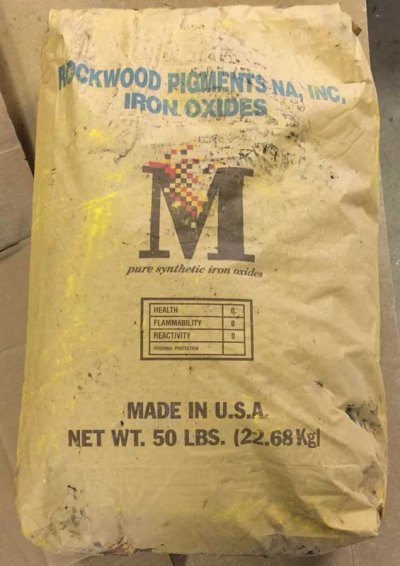 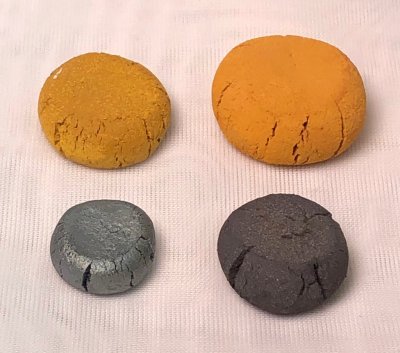 The rear two samples are just dried. The fired iron oxide (front left) is clearly exhibiting a metallic sheen and has shrunk and become much more dense. And heavy. In the raw state, both exhibit a measure of plasticity when water is added. The yellow iron really holds on to the water, drying out much more slowly. The iron oxide densifies and shrinks even more by cone 8, taking on the characteristics of the metal.

Yellow, black and red Iron oxide in a body

Plainsman M340 buff cond 6 stoneware. 3% iron was added. The yellow is clearly not as concentrated. The black give a maroon color.