Also known as Hawthorne Fireclay or just Hawthorne. It is a popular buff firing plastic Missouri fireclay of fine particle size and has long been used in many commercial clay body recipes. It fires a buff to tan color with approximately 12% total shrinkage at cone 10. Ground to 35-40 mesh.

This is a different material than AP Green fireclay. The latter is a greenish raw color (this is greyish) and has many more coarser particles in the slurry state. The plasticity of this is such that it can be mixed as-is and used effectively on a potters wheel. Plasticity is quite similar to the AP Green fireclay also. The fired maturity of this is such that it needs only a small amount of feldspar to vitrify in the cone 8-10 range.

Val Cushing recommended Hawthorne as a substitute for Pine Lake Fireclay. However our testing indicates that although the two have similar porosity over a range of temperatures, this has much higher fired shrinkage and lower drying shrinkage. He also recommended mixing this with 15% Lizella red as a substitute for PBX Fireclay, that is not far off the mark with the latter is a little less vitreous and fires a little darker.

Hawthorne fireclay is really more of a stoneware clay 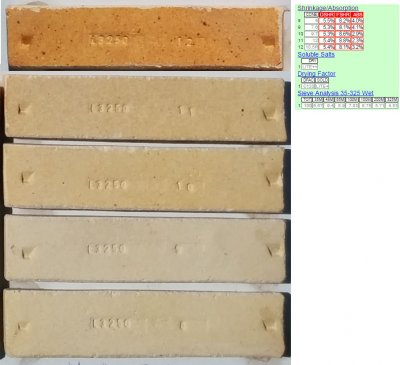 This is test-result data as reported from an account at Insight-live.com from a test done in 2002. The numbers in the first column in the shrinkage absorption section are the specimen numbers, they bars are labelled (on the right) with them. This clay is already quite dense and vitreous by cone 10 oxidation and reduction (having a 3% porosity) and it has a high fired shrinkage (more than 8%). Drying shrinkage is very low and its drying factor (performance) is good (even though it is quite plastic). The manufacturers data sheet shows higher firing shrinkage figures, however their numbers are actually total fired+drying shrinkage. 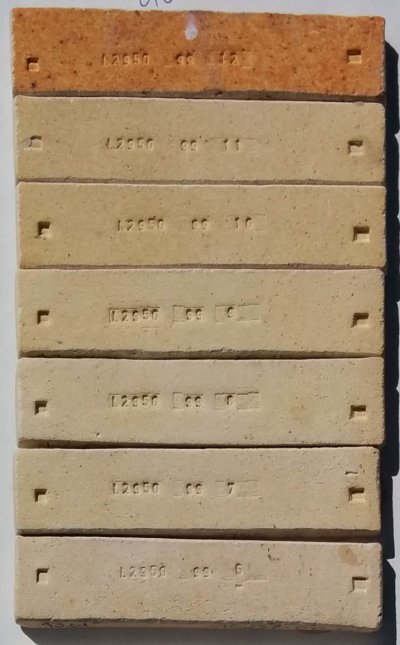 This is a Hawthorne Fireclay sample from 1997, these test bars are made to measure fired shrinkage and porosity. Top bar: Cone 10R. Proceeding down from there is cone 11, 10, 8, etc (oxidation). Drying shrinkage is 4.5%. Firing shrinkage is about 8% at cone 11 going down to 7% at cone 6, it is thus very stable across a wide range. Porosity is likewise, 3% at cone 11 slowly rising to 5% by cone 6. So this material is already fairly vitreous by cone 6 yet still stable at cone 11.