Often used in clay bodies instead of grog or to augment grog. However the particle shape should be taken into account. Silica sand particles can be rounded or angular, the latter being more suited to clay bodies. However, the very high thermal expansion behavior of the quartz grog should not be ignored. During temperature changes (like cooling in the kiln), quartz grains act independently in the surrounding brittle matrix, imposing their size changes and weakening the fired item or contributing to dunting (grogs are available that have almost zero thermal expansion).

Silica sand is often used to reduce body firing shrinkage and fired warpage. But it is often better to reduce the flux sourcing material in the body (usually feldspar) instead.

Also used as a lubricant on kiln shelves to prevent ware from sticking and enable it to move while shrinking. Silica sand is used as a source of SiO2 in the glass industry and for a wide range of things in others.

Many sizes and particle shapes of silica sand are available. Colors can range from white to brownish, the latter containing iron. Small amounts of iron or contaminating products can darken the sand considerably. Many industrial silica sands are not suitable for ceramics because of the level of impurities they contain. 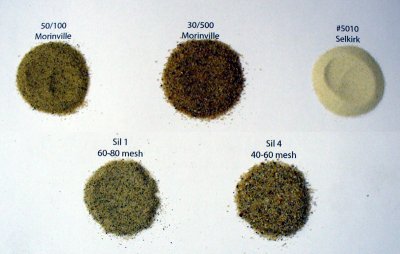 Examples of some different silica sands