The most stable form of uranium and the one found in nature.

But is it really stable? Here is a comment from a visitor:

"I experimented with uranium in the late 1970s. I bought some at a pottery supply company in the Fraser Valley, B.C. It was a coarse black powdery substance said to be depleted. I made a few glaze tests with it. Then I decided to take the glaze tests which had less than 10% of whatever this black powder was, and the bag of the substance I had bought, to the Simon Fraser University radiation lab.

A researcher talked to me.

He held a test instrument up to the glaze test tiles, and to the bag. Without saying anything more he quickly put the test tiles and the bag into plastic, sealed it, and picked it up with tongs and put it behind a lead wall. Then he explained.

He pointed out that he loved being around radioactive substances so much he worked full time with them. But because he was so familiar with radiation, he said, he had learned to be cautious. He said he would never carry a bag emitting as much radiation as the bag I had anywhere near his testicles. (I had walked in with it in my coat pocket). He said even the test glazes had more radiation coming from them than what he would like to have coming from his ceramic dishes. He talked with someone else in the lab, then, looking very dubious, he said I could have my materials back. He didn't think such material should be sold to people who had not studied radiation and how to protect themselves from it. He advised me to make a lead box to keep the material in.

I stopped experimenting with this material. " 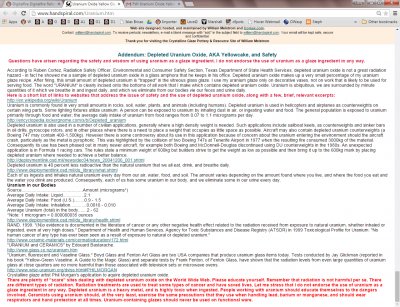 A screenshot of a page at William Melmstrom's website handspiral.com (he is in Austin, Texas). He is using uranium oxide to make incredible yellow crystalline glazes. The information is here is very educational and enlightening. And the vases he makes: Wow!