In ceramics, metal oxides can be employed to produce metallic and iridescent effects. These are typically done on a third firing, often with reduction atmosphere.

Ceramic Colours and Pottery Decoration by Kenneth Shaw, published by Maclaren and Sons Ltd., London, 1962, reissued 1968.
Lustres by Margery Clinton, published by BT Basford Ltd. London, 1991. This book covers how to make and use lustres. 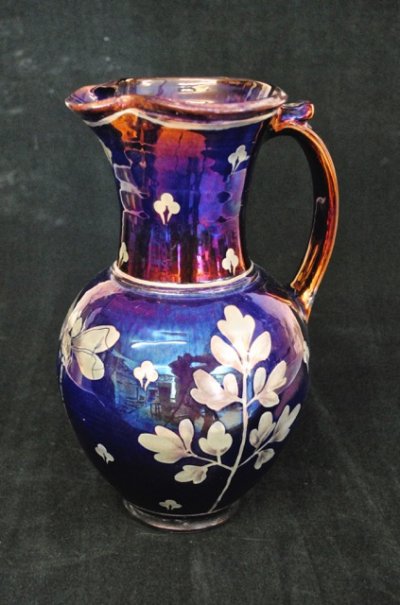 The process he has evolved requires 3 firings. First, the dry porcelain ware is spray-decorated with metal oxides (iron, manganese, copper, chrome and cobalt oxides) and then high bisque fired to cone 9 to bond them on and vitrify the body. Then a cover of lead borosilicate glaze is fired on at cone 04. The lustres (made of clay, which washes off after the lustre firing, mixed wtih silver chloride or silver carbonate) are mostly applied with a brush over the fired 04 glaze and reduction fired on at cone 018. He makes red by blending copper carbonate and bismuth sub nitrate with the clay, and this can be mixed with the silver clay paste to make a ‘gold’. He also sometimes adds silver to the oxide sprays which creates a lustrous underglaze.