In ceramics, the zone of adherence between glaze to the underlying body is called the clay-glaze interface. The integrity of this interface is important to strength and functionality.

In ceramics, the zone of adherence between glaze and the underlying body is called the interface. The integrity of body-glaze interface is important to strength and functionality of ware. In porcelains it is much more highly developed than in earthenwares. In the latter, the glaze, although melted well, is in contact with a body that is developing no glass and has little strength. Thus the mechanism of the bond is simply the roughness of the body surface (where the glaze can hang on) and the collective strength of that roughness. With porcelain, the glaze is able to form a bond the spans across the boundary in both directions, creating a interfacial zone of changing microstructure. Needless to say, this bond is almost unbreakable. Other types of body/glaze combinations form bonds that are somewhere between these two extremes.

Because higher temperature and/or more vitreous bodies form a better glaze bond ware can withstand greater differences in thermal expansion between glaze and body without crazing or shivering. By contrast, earthenwares shiver and craze easily.

Interface is also an issue with engobes and slips. The integrity of the bond they form is analogous to glazes, but with much less glass development. Porcelains, by nature, do not need an engobe, whereas lower temperature bodies whose surface needs to be color-lightened for glazing commonly employ engobe coverings (especially in the tile industry). However, making the engobe fit the body can be much more difficult. Its drying shrinkage, firing shrinkage, quartz and cristobalite reaction and thermal expansion all need to be matched to the body. 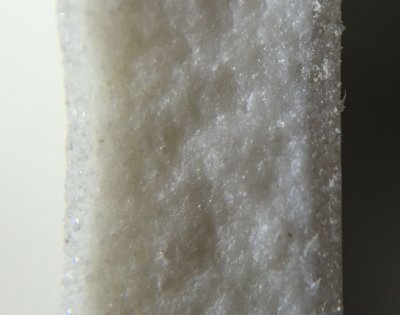 Porcelains look much more glassy and melted than you might expect when viewed close up (this is cone 6 Polar Ice from Planisman Clays). The development of the glassy phase within the body creates a very good bond with the glaze. Actually it is a bonding zone where the glaze has melted into the body enough to create a transition rather than just a point of contact. The degree to which this transition develops determines the integrity of the bond. Of course, with porcelains it is far better developed than with stonewares and terra cottas. 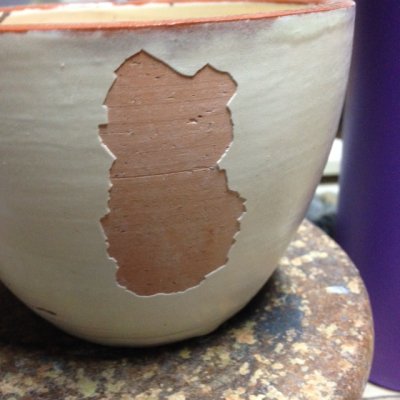 This glaze is on very thick. That gives it the power to impose its thermal expansion (which is different that the body) to the point where it literally flakes off. The problem is worsened when the glaze and body lack fluxes, that means they do not interact, no glassy interface is formed.

The green underglaze is failing on impact 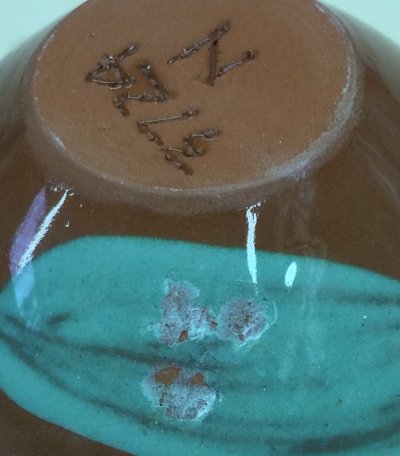 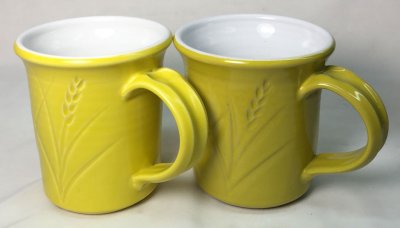 The same glaze on both pieces. Fired in the same kiln at cone 6. Both are porcelains, but the one on the right is far more vitreous (it fires off-white so coloured glazes lose some of their brightness). The body is so vitreous that there is considerable interaction between it and the glaze, enough diffusion occurs to affect the surface character.